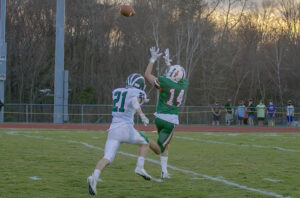 Nick Lecesse hauls in a long pass from Cole Salyards during the Hillers’ victory over Westwood. PHOTO/JOHN CARDILLO

Cole Salyards ran for two touchdowns, passed for another and caught an 85-yard TD pass on Friday night as Hopkinton High School won its second straight game with a 48-29 rout of visiting Westwood.

Trailing 14-7 early in the second quarter, the Hillers (2-2) ran off 28 straight to close the half and take a 35-14 lead into the break. Hopkinton remained in control the rest of the way.

Salyards, normally a quarterback, started the streak when he switched to receiver and caught an 85-yard TD pass from Robert Litscher. Running back Cam Mulvaney then punched it in from a yard out for his second touchdown of the night (he also had an 11-yard run in the first quarter), putting the hosts ahead for good.

After HHS lineman Aidan Morin recovered a Westwood fumble near midfield, the Hillers capitalized, as Salyards ran it in from the 1. While the defense stifled Westwood’s offense, Hopkinton’s offense continued to click, with Salyards finding Nick Lecesse for a 43-yard touchdown pass in the final minute of the first half.

On Hopkinton’s opening drive of the second half, Salyards broke free for a 33-yard TD run and, after Avery Ravech’s sixth PAT kick of the evening, a 42-14 lead.

Hopkinton closes out the season when it hosts Norwood next Friday night.