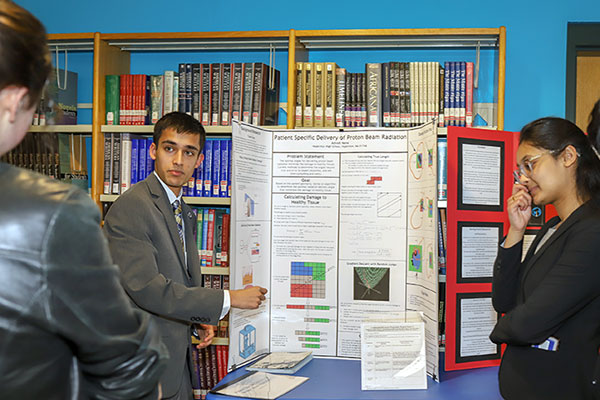 Nearly 100 students who participated in the Hopkinton High School Science and Engineering Fair proved that learning does not end when the bell rings.

They used the knowledge they gained in their science classes to solve daily life problems and possibly change the world, from improving vision to bringing wind turbines to urban areas to potentially life-changing approaches to health conditions such as Huntington disease, cancer and anemia.

The fair, held Feb. 25,  was one of the largest in school history, with 85 students presenting 41 projects.

That’s a significant increase from the 15 projects presented about five years ago, Murphy said.

Participants meet with mentors and work on their projects outside of class time. “It’s a very big undertaking for students who are already very busy,” Murphy said.

The students, in grades 9-12, choose their own topics. “They have a lot of say in what they present,” Murphy explained. “They all choose projects they are passionate about.”

For Murphy, the most rewarding aspect is seeing the students translate concepts they have learned in class and using them to “answer a question they care about.”

“That’s the dream for a teacher,” she said.

The 2020 Valerie Lechtanski Prize for Perseverance went to Deirdre Belger and Morgan Berenson (The Impacts of Light on Vitamin C in Drosophila). 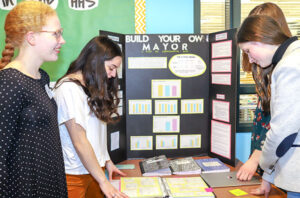 HHS students (from left) Celia Jenkins, Fiona Medeiros and Kira Sward (face hidden) talk to attendee Carly Ozmun about their project, Build Your Own Mayor: A Study on Confirmation Bias, which was a regional qualifier.
PHOTO/CHRISTINE STRICKLAND