The HHS boys basketball team was the eighth and bottom seed in the MIAA Division 2 Central sectional, but the Hillers showed that they were much stronger than their 10-10 regular-season record indicated, pulling off two upset wins and reaching the sectional championship game against Wayland on March 7 (after the Independent’s deadline).

“The team has demonstrated a wonderful esprit de corps throughout the season and it has been amplified during our tournament run to the district finals,” coach Tom Keane said after the semifinal win. “I am grateful for the senior leadership demonstrated by Steven [Maffiore], Tommy [Ambrosone], Ellis [Spar], Drew [Rancatore], Ned [Dean], Elan [Rosen], Jacob [Cohen] and Travis [Finfrock]. I am very proud of what they’ve accomplished and hopefully they have more successes to come.”

In the opening game against host Grafton, the top seed that came into the game with an 18-2 record, Hopkinton gritted out a 59-55 victory. The win was fueled by a 25-point, 10-rebound effort from Rosen, the team’s senior center.

In the semifinals at Clark University on March 3, the Hillers took out fourth-seeded Milford, 66-59. Hopkinton jumped out to a 14-0 lead and led by as many as 19 in the first quarter. The Scarlet Hawks fought back and got as close as three points in the second half, but Hopkinton never relinquished the lead.

Rosen again was a force down low, scoring a game-high 17 points before fouling out with four minutes remaining. Maffiore added 16 points, Ambrosone scored 12 points and provided his usual stellar defense, and Dean came off the bench to provide a huge spark at both ends of the court, finishing with eight points and five rebounds.

“We were really locked in on both sides of the court to start the game,” Ambrosone said. “All 14 guys were into it and contributed to a win. We knew they would go on a run and make it close and we just had to grind it out. Luckily we were able to do so.”

Hillers hockey bows out in quarterfinals 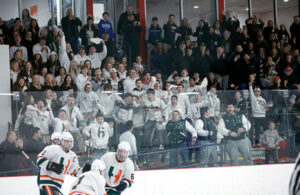 Members of the Hopkinton cheering section celebrate after a goal during the Division 3 South sectional quarterfinals on March 1 in Canton. The joy was short-lived, however, as the Hillers’ memorable season ended with a 5-2 loss to Bishop Stang.
PHOTO/TRICIA LACASCIA PHOTOGRAPHY

The Hopkinton High School hockey team’s record-setting season came to an end on March 1 with a 5-2 loss to Bishop Stang in the Division 3 South sectional quarterfinals.

Seniors Sean Walsh and Tommy Hamblet scored for Hopkinton, which surrendered two empty-net goals that made the final score appear more lopsided than the game was.

The top-seeded Hillers had opened the tournament with a 5-3 victory over Silver Lake. Kyle Rogers led the way with two goals and an assist. Walsh, Ron Shamus and Pavit Mehra had the other Hopkinton goals.

Hopkinton finished the season with a record of 20-2. …

The HHS girls basketball team was ousted from the Division 2 Central sectional playoffs with a 57-45 loss at sixth-seeded Wayland on Feb. 24. Hopkinton got off to a strong start, taking an eight-point lead early in the second quarter, but the Warriors took control before the half and kept the Hillers (10-11) at a safe distance the rest of the way.

Hopkinton sent six skiers to the MIAA Alpine Ski State Championship on March 4 at Berkshire East Mountain. Warm weather and rain prior to race day made the conditions challenging. Top finishers for HHS on the boys side were senior  Jack Rodgers, who finished 26th overall, and junior Jackson Schlussel, who was 32nd. On the girls side, Cate Barry took 33rd. …

HHS diving coach Jim Brainerd was selected to the Eastern Massachusetts Interscholastic Swim Coaches Association (EMISCA) Hall of Fame. Brainerd has coached for more than 40 years, including 15 in Hopkinton.

In the boys 2-mile race, senior Alex Brown finished seventh, shaving five seconds off his personal best with a time of 9 minutes, 29.72 seconds, just barely qualifying for nationals — the first Hopkinton boy to do so in at least five years, according to coach Jean Cann.

Simoes off to fast start for Army baseball

Hopkinton’s Tim Simoes, a junior infielder on the Army baseball team, was named Patriot League Player of the Week on Feb. 25, two days after he went 4-for-6 with five RBIs and two doubles in a loss at 13th-ranked Texas A&M. Through the first 10 games of the season Simoes was batting .333 with four doubles and six RBI. …

Mikayla Pucci was named to the NEWMAC basketball honor roll for the final week of the regular season after she averaged 23.5 points in two games, including a 27-point outing on 11-of-13 shooting vs. MIT in Wheaton’s season finale. The former Hopkinton High standout finished the season averaging 13.0 points and 6.3 rebounds, both team highs for the Lyons, who finished 7-17 overall and 1-9 in conference play. The junior co-captain also was named to the NEWMAC Women’s Basketball All-Academic Team. …

At the University of New Hampshire, sophomore Ivy Gogolin played in all 28 regular-season games, starting 11, and averaged 4.0 points and 3.0 rebounds in 13.8 minutes per game. The Wildcats were 10-18 overall and 7-9 in America East play heading into the conference tournament. …

The 29-year-old Floris ran a qualifying marathon time in 2017 between the births of her two daughters, the youngest of which is 13 months old. The Pepperdine University alumnus now lives in Chino Hills, California. Her marathon best is 2:44:16.

Philbrook, 32, did not finish the race, dropping out after eight miles. She had a pretty good excuse, considering she is seven months pregnant.

An assistant professor in the Psychological and Brain Sciences Department at Colgate University, Philbrook finished 29th in the 2012 trials and 32nd in 2016. Her marathon best is 2:38:00.

Both women, former Hopkinton High School teammates, qualified for the trials at the California International Marathon in 2017.

← HHS students impress at science fair Letter to the Editor: Traffic a problem →