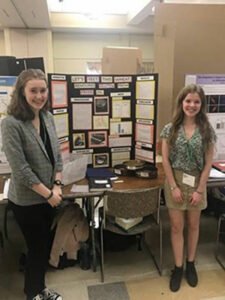 Alisa Stolyar (left) and Alannah Miller received a second-place award and placed fifth overall for their project during the regional science fair at Worcester Polytechnic Institute on March 8.

Hopkinton High School had an excellent showing at this year’s regional science fair at Worcester Polytechnic Institute on March 8. Seven HHS projects scored in the top 40 out of 130 projects in the region and qualify to move on to the state fair at MIT on May 4.

Students began working on their projects back in September, working individually or in teams to do research on a science or engineering topic of interest to them. In October, the students had a chance to learn from industry experts when a number of scientists and engineers in the community came in to spend an evening with the students to answer questions or give feedback on their projects.

“We decided to reach out to the community to tap into the many resources we have here,” Murphy explained. “We have so many scientists and engineers living in Hopkinton that we know can give the students advice and valuable insight.

“It also gave students the opportunity to talk to real scientists and engineers to see what their future could look like.”

Project research and planning continued until Feb. 26, when 97 students with close to 50 projects presented at the annual Hopkinton High School Science Fair.

“We have held this fair for 31 years. It’s one of the longest programs in the state,” Murphy said. “It is my favorite day of the year. It’s inspiring to see these students choose topics that means so much to them or their families or their communities and spend so much time investigating them.”

The projects were evaluated by a panel of local judges, and the top 12 projects moved on to the regional science fair in March.

At the regional fair, two HHS teams placed in the top 10 overall.

“Four in 100 people have some sort of gluten sensitivity, so we wanted to figure out a way to make it safe for them to eat fried food in restaurants by filtering or straining out the gluten in the oil,” Miller said.

The duo made a prototype of a strainer basket that could be used to filter out the protein that can be harmful to people with gluten allergies or celiac disease.

“It was a simple and practical way for restaurants to strain out the gluten from fryer oil,” Miller said.

Rohan Minocha also placed in the top 10 with a second-place award and a seventh-place overall finish for his project titled, “Systems and methods for automated programmable dispensing of medication.” Minocha built an automated pill dispensing device that helps prevent unintentional injury and death due to misuse of prescription medication.

Minocha was inspired to take on this project after seeing his grandmother struggling to remember to take her medication at the right times.

“I first looked for a device for her, and when I didn’t find one, I set out to build my own,” he said.

HHS had five other projects score in the top 40 overall, and those individuals will be joining the others at the state science fair in May.

The students were formally recognized at the March 21 School Committee meeting.

“It blows my mind that you come up with these ideas — practical things that are helpful in the world,” commented School Committee Chair Nancy Richards Cavanaugh. “It’s amazing to imagine where you are going if you are doing this in high school. I look forward to hearing more about you in the future.”