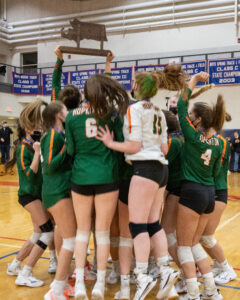 Westborough middle hitter Christine Li rose with a purpose. The talented senior brought her arm back, swung through and unleashed a powerful strike on the volleyball, driving it with force over the net.

And Hopkinton’s Mikayla Grady blocked it, sending it to the ground to win the Division 2 state championship.

That was the story of Saturday’s match — a clash of titans, as the public address announcer at Tewksbury High School introduced it, with both teams coming in undefeated. Top-seeded Westborough brought the power, but third-seeded Hopkinton found the answer.

“It’s a dream,” HHS coach Margie Grabmeier said. “This is what they were planning for and the goal that they had since the first day of tryouts, when they set team goals. They did it. They work hard at practice, they bring it in games, they have great team chemistry and they help build each other up.”

The win was the 307th and final one for Grabmeier, who is retiring after 18 seasons leading the Hillers. This marks her third state championship.

Her players desperately wanted to send her out on a winning note, and they played like it.

“This whole season we’ve been trying to make her last year the best year possible, so I’m so proud of our team and so proud of her that we were able to win this game and be undefeated,” Grady said. “It’s the best thing ever.”

Westborough got out in front in the first set, taking a seven-point lead at 14-7. The Hillers closed to within four but could get no closer, and the Rangers took a 25-19 win.

The second set was a reversal of fortunes, with Hopkinton getting out ahead by six early. Westborough rallied to the score at 18, but Annabelle Senseney and Kate Powers had big kills down the stretch in a 25-23 win. Westborough committed a service error at set point.

“We were getting contributions from all of our offense,” Grabmeier said. “It makes it a little bit harder to defend when you’re not really sure [who to focus on, as] everyone can put the ball down.”

Neither team had lost a third set the entire season, and this one required extra points to decide it. The first point of the set was a long one and included a few impressive digs from libero Sam Berenson, the defensive star, and ended with a hit by Powers that was not returned.

Hopkinton went up 7-4 before Westborough rallied and took a 13-9 lead. Back came Hopkinton with eight straight, including a couple of ferocious spikes from Powers, to take a 17-13 lead. Westborough fought back for a 22-20 lead, and the Rangers were up 24-21 and serving with a chance to win the set. However, a service error was followed by a Melanie Gildea kill and a Grady kill to tie things up. Twice Westborough went up by a point, with a chance to close out the set, only to see Hopkinton fight back. A Powers kill then put the Hillers up one, and Senseney tipped a wayward Westborough pass to the ground to end the set, 28-26.

“They had game point twice, and we came back,” said Cathryn Leighton, a captain and one of the team’s seniors. “It’s just so special because there’s eight seniors and it’s Margie’s last year, so winning today was so cool and so great.”

Hopkinton scored the first four points of the fourth set, but Westborough would not quit, fighting back to take a 10-7 lead and extended it to five points at 17-12. The Hillers rallied and tied the score at 18 when Senseney’s serve hit the net and rolled over, with the ball falling to the ground untouched. It remained tied at 23 after some exciting back-and-forth action, including a cross-court spike from Gildea and a kill from Meg McCarron.

Westborough took its final lead at 24-23, leading to a Hopkinton timeout. The Hillers then dodged a bullet as a potential set-winning spike from sophomore standout Quinn Anderson went just wide of the sideline. Hopkinton went up by a point as Berenson let a Westborough hit go out of bounds past the end line. Then Grady ended it with her block.

“It’s so great to come out on top,” Grabmeier said. “It could have gone either way. Westborough has an amazing team, which just makes it that much more gratifying. They know that they had to earn it.”

The Hillers received contributions from up and down the lineup, including seniors Sarah Furlong and Kate Dion and sophomore Abby Hebert.

“This is the best team I think I’ve ever been on,” said Hebert. “The chemistry between us is unreal, and it’s unlike any team that I’ve ever played with.”

The champs were welcomed back to town Saturday night with an escort from the Hopkinton Fire Department, complete with sirens and lights.

Alison LePage and Loryn Canty contributed to this story.