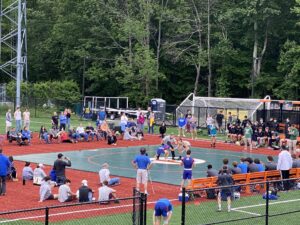 In more than 25 years around the sport, Hopkinton High School wrestling coach Tim Nelson had never had a winter go by without rolling out the mats. The COVID-19 pandemic changed all that, and Nelson admits he felt the walls closing in a bit when the holidays rolled by and there were no tournaments to follow them.

But the pandemic did allow for one silver lining: the chance to compete in an unusual outdoor meet.

“It was insanely cool and it will probably never happen again,” Nelson said.

The outdoor match took place June 3 against the Hillers’ border rivals from Ashland, and Hopkinton pulled off some individual upsets to run away with a 17-point victory. The MIAA had been encouraging outdoor matches when possible because there is a lower risk of spreading COVID-19 outdoors and less-stringent mask requirements.

“It felt somewhat normal to see all the parents’ and kids’ faces,” Nelson said.

The Hillers loaded up the mats in the back of Nelson’s truck and drove down to the softball field to unroll them on the brand new turf. They set them up the same way they would for an indoor competition in the athletic center.

“Once the mats were down, it was really an electric atmosphere,” Nelson said. “We could each bring unlimited fans.”

Nelson estimated that around 200 people watched from the outfield. It was so loud, he said a parent watching the nearby baseball game came over to see what the ruckus was all about. Nelson said another outdoor setup was planned for the final regular season meet, but that likely will be the last one.

“It was fun, it was cool, but it’s probably something that will never happen again,” Nelson said. “As much as I would like it, I also don’t want another spring season with all of these regulations.”

The Hillers have handled the challenges that have come their way, starting the year by winning three of their first four matches. The program has benefited from continuity, with all four captains returning from last year when the team did not have a single senior. Mo Zaidi, Will Tedstone, Jake Sokol and Hayes Pearson-Woodruff have all continued to shine in their leadership roles.

“It was huge to have that whole nucleus of guys, especially this year when you really need leaders to step up,” Nelson said. “My four captains have stepped up with leading the team and doing everything the coaches have asked of them.”

Junior Luke Dionne has been a leader on the mat after being a state finalist last year. And the entire team has been thrilled to be competing after wrestling was the one winter sport that did not launch in either the winter or Fall 2 seasons.

“I didn’t have a great feeling about it, but once the petition to move to the spring was approved I knew there was a fighting chance,” Nelson said. “But then February came and there was a spike in cases and it wasn’t looking good. But once the vaccines rolled out and the numbers started coming down, the MIAA came up with a plan.”

There will be no individual postseason tournaments this year, which came as a disappointment to some of the program’s top wrestlers. But following the dark days of winter with an outdoor match in the sunshine is a memory they will have forever.

“We made it through,” Nelson said. “It would have been heartbreaking to not have our seniors compete, so it was great to give them this chance.”