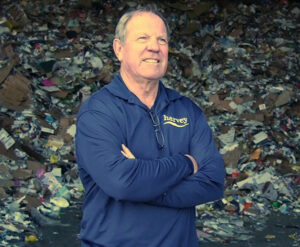 E.L. Harvey President Ben Harvey pauses in front of 5,000 ton backlog of recycled paper and cardboard at Harvey’s Hopkinton facility in January. Since then, Harvey said he has shipped out about 3,500 tons to other countries including India, Indonesia, South Korea and Turkey.

During the eight months since the Independent first reported on the local impact of China’s crackdown on recycled materials from the U.S., single stream materials recovery facilities such as E. L. Harvey & Sons in Hopkinton have been attempting to adapt to the new reality.

On Jan. 1, China stopped taking recyclable materials from around the globe, including from the U.S., the world’s largest exporter of paper and plastic.

Harvey’s facility sent its last shipment of paper and cardboard to China in early January.

According to E.L. Harvey President Ben Harvey, by the end of January, his facility had a backlog of materials that had grown from a few hundred to 5,000 tons.

Since then, Harvey said he has shipped out about 3,500 tons to other countries including India. Indonesia, South Korea and Turkey.

However, the bad news, according to Harvey, is that the cost of reducing the backlog has increased dramatically.

Not only do those countries pay less than China for recyclables, said Harvey, “but now we also have to pay the freight costs.”

Shipping to China was less expensive, Harvey explained, because “container ships bringing waste to China were quickly turned around to carry exported shipments of electronics and other goods packed in cardboard boxes made from the recycled waste.”

The problem started last summer, when, according to a report by National Public Radio, “China declared that this ‘foreign waste’ includes too many other non-recyclable materials that are ‘dirty,’ or even ‘hazardous.’”

“In a filing with the World Trade Organization, the country listed 24 kinds of solid wastes it would ban ‘to protect China’s environmental interests and people’s health,’” reported NPR.

Materials recovery facilities (MRF) around the world, just like the Harvey facility, can no longer meet the new quality standards set by that country.

“They want no more than .05 percent contaminants,” Harvey said. “We’re currently running about 1.5 percent,” which is better than the industry standard of .3 percent.

The recycling system is housed in a new 80,000 square-foot facility and is permitted up to process 600 tons of residential recyclables per day.

The highly-automated MRF, which includes the latest in screening and optical sorting technology, recovers more than 95 percent of available recyclables.

While still not good enough to meet China’s new standards, Harvey and other facilities like his around the world do have options moving forward.

Among the solutions, according to Steve Changaris, Northeast Regional Director of the National Waste & Recycling Association (NWRA), are better engineering and better education.

“Even state of the art material recovery facilities like Harvey are looking at further improving their operations,” said Changaris.

“One of the next things were looking at is robots with optical sensors,” noted Harvey.

“But that needs to be done from the 30,000 foot level,” he said referring to environmental agencies on the federal and state levels.

Harvey has already been in talks with officials at the state Department of Environmental Protection (DEP) about statewide initiatives aimed at educating the consumer about better disposal and separation of recyclables.

As part of a long term process, said Harvey, the NWRA has been working with the Mass DEP to develop a “single universal list of what can and cannot be recycled.”

Currently there is a great deal of misunderstanding on this among area residents, along with varying levels of enforcement by municipalities

The single most misunderstood item, according to Harvey, is pizza boxes.

“I’m beginning to think the whole country lives on pizza, based on the number of questions we get about pizza boxes,” said Harvey.

“The fact is those cardboard can be recycled, as long as there are no crusts or other food matter inside,” he said.

But, educating the public about proper recycling is a long term process.

“A short term method to reduce contamination in recycled waste is for MRFs to slow the line down in order to sort better,” said Changaris.

“Of course that takes more time and requires more people and in the end costs more,” he said.

Both Changaris and Harvey seem to feel that some increased costs for municipalities, along with stricter regulations are inevitable.

“We’ve learned our lesson,” he added, referring to the recycling industry as a whole.

“This has been in the works for a while now, even before China,” he said. “We need to share the risks with our customers.” 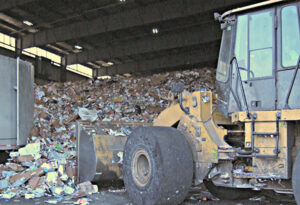