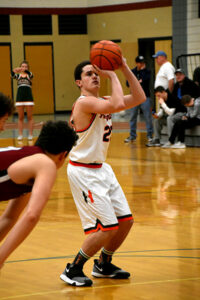 Forward Drew Rancatore is one of the seniors who will be counted on to provide leadership and experience for the Hillers this season.
FILE PHOTO/JERRY SPAR

A talented and experienced backcourt leads the Hopkinton High School boys basketball team into a new season, and the Hillers are aiming to return to the postseason after making the sectional tourney a year ago.

“We always want to make the tournament,” said Hillers head coach Tom Keane, who has led the team to the playoffs in 16 of his previous 19 seasons at the helm of the program. “But we also want to keep improving. We want to keep getting better every day. I don’t have a number of wins in mind, but hopefully we will have a winning season and keep getting better.”

Hopkinton finished 14-6 last year, bowing out in the first round of the sectional tournament. The Hillers graduated three starters from the 2018-19 squad, but several veteran players return, including point guard Tommy Ambrosone.

“He ran the point for us last year and he will be doing it again this year,” Keane said. “He does a little bit of everything. He kind of fills up the stat sheet by distributing the ball, rebounding, playing defense, he does it all.”

Steven Maffiore will be one of Hopkinton’s top scoring threats after scoring 13 points per game during his junior campaign and earning Tri-Valley League All-Star recognition. Keane said the senior is an excellent shooter from the perimeter but will be pressed into handling the ball more this winter.

“Our guard play is an area of strength, and I think we should have a lot of kids who can shoot the ball well,” Keane said.

Despite being more guard-oriented, Keane said the Hillers will be focusing on improving their interior defense and rebounding.

“We are trying to improve defensively,” the coach said. “We want to turn teams over more than we did last year and get out in transition a little bit better.”

Elan Rosen is the team’s top inside presence this winter. The 6-foot-4 senior is going to be counted on to rebound and guard inside, as well as give the Hillers a post presence, Keane said. Senior forward Drew Rancatore is another experienced front-court player who provides a midrange game for HHS.

Keane said he isn’t sure yet whether his team will be among the top echelon in the TVL, labeling Westwood and Medfield as two of the teams to beat in the Large School Division.

Keane said he is hopeful his team’s experience will be a boost as it tries to keep pace with the TVL’s best.

“We have seven returning players and we are going to count on them,” he said. “The whole senior class is made up of kids who are going to get some minutes.”