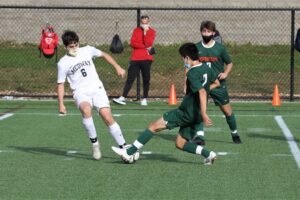 Junior Tora Ito battles for a ball in a game against Medway earlier this season while teammate Sam Vasington watches. PHOTO/JOHN CARDILLO

There is no sectional tournament or league title for the Hopkinton High School boys soccer team to compete for this year, but that has not stopped the Hillers from making the most of the season they get to have.

“You don’t have that playoff element, but it’s still competition and it’s still soccer,” coach Garrett Sawyer said. “So we are still having a lot of fun.”

The Hillers compiled a 1-2-4 record through the first seven games of the 10-game slate, which was to end Nov. 8. The games themselves have been different with COVID-19 restrictions that prohibit contact between players and force the game to the ground by outlawing headers and other arial play.

“There have been a lot of whistles,” Sawyer said. “Players want to play physically and it’s really difficult to avoid the contact, so that’s where we are getting most of the whistles. The kids are learning to live with it and it disrupts the flow of the game, but that’s the way it is this fall.”

Hopkinton is not a senior-laded team this fall, but senior captain Patrick Crantz has been a standout for the Hillers in goal.

“He is an excellent goalkeeper and he has kept us in a lot of games,” Sawyer said. “But he is also really good at providing vocal leadership during games and practices. He loves to get out there and compete every day and he loves the sport. He has been a great leader and he brings a lot of energy.”

Junior captain Owen Schnur has boosted the scoring, including scoring four times in two games against Norton on Oct. 24-25 (a 3-2 win and a 3-3 tie).

In the Oct. 25 game Spencer Smith scored with 10 minutes remaining, the third time Hopkinton came back from a deficit. Schnur netted two goals, while Andrew Gaughan had two assists. Crantz had some big saves in goal.

In the Oct. 24 win Schnur scored the winner — his second of the game — on a laser to the upper right corner from just outside the box. Tora Ito had the assist after tapping the ball to Schnur on a free kick. Gaughan set up Schnur’s other goal, in the second quarter, delivering a long ball into the box that Schnur deflected into the goal with his shoulder (headers have been banned due to COVID). Gaughan also played a key role in the Hillers’ first goal, sending a cross to Ito for a left-footed finisher in the fifth minute.
Ito, a junior, has provided a spark this season.

“Tora is really strong as a kind of a general in the middle of the field, possessing and distributing the ball,” Sawyer said. “He inspires kids with the way he has played.”

Without any long-term goals this year, Hopkinton has adopted a “short-term” mindset.

“It’s all about just preparing and competing in the next game,” Sawyer said. “ ‘Who do we have next?’ And we get ready.”

As is the case for all the teams in Hopkinton’s “pod,” the Hillers have been playing back-to-back games on Saturdays and Sundays.

“With the back-to-back games, you are hoping that the Sunday game is one in which you can adjust and improve based on what you just did on Saturday,” Sawyer said.

With only a couple of seniors on the roster, there also is an eye toward next season and laying a foundation for the program for the years to come. But having the chance to get out on the field this year has helped the players on the 2020 team put the sport into perspective, especially after some of their peers missed out on the spring sports season.

“That’s been the philosophy this fall, the most important element has been safety and to participate and play and the seniors are having a great experience, too,” Sawyer said. “We are lucky to be out here and we remind ourselves that just getting the chance to play is outstanding, so that’s made some of the changes more bearable.”