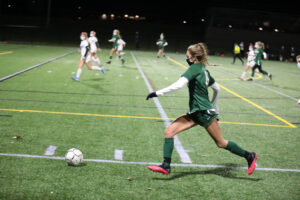 Coming into a season having graduated 12 seniors from the previous year would be a challenge for any team. But the Hopkinton High School girls soccer team also has had to deal with the new rules and a compressed schedule foisted on it and every other school during the COVID-19 pandemic.

Even so, the Hillers have responded as well as could be expected to a year unlike any other.

“The one thing this team has shown is their individual and collective resilience and maturity,” coach Tom Skiba said. “We graduated seven starters, so we knew this was going to be a challenging year to begin with. So you have that and you layer on top of it all of the obvious COVID restrictions.”

Hopkinton posted a 4-2-2 record heading into the final weekend of the season (Nov. 7-8). On the weekend of Oct. 17-18 the Hillers earned a tie and suffered their first loss against defending state champion Holliston, which has rattled off a nearly 30-game unbeaten streak.

“The loss was arguably our best performance all year in terms of how the team played and our ability to possess the ball,” Skiba said. “We generated quality scoring chances against a really good team. The way we performed, I thought, was fantastic, given the opponent and everything we were up against.”

Mother Nature dealt Hopkinton and its competitors yet another setback, as a late October snowstorm postponed a couple of games against Ashland. When they were made up early last week the Hillers took a 3-1 victory before dropping a 1-0 decision despite controlling much of the play.

In the victory, freshman Johanna DuPont scored two goals, Lexy Trendel had one tally, Gabi Ciri had two assists, and Ava Perlov had the other assist.

The previous weekend, DuPont scored the game’s lone goal in the 64th minute of a 1-0 victory over visiting Norton on Oct. 25. Tiffany Mikulis started the game-winning sequence when she dribbled up the left side of the field and sent a pass up to Trendel, who tapped it to Brooke Dougherty near the left sideline. Dougherty delivered the ball to the middle of the box just before she was knocked down by a Norton defender. DuPont got a step on her defender, raced in and beat the goalie to the ball, redirecting it into the middle of the net.

On Oct. 24 the girls picked up a 3-1 victory at Norton. The goals were scored by DuPont, Brooke Birtwhistle and Ashley Butler. DuPont, Kylie Skiba and Lillian York had assists. Butler and Mikulis starred on defense, which has taken on a new challenge due to the adjusted rules for the season.

“They have been very good at handling the new rules,” Skiba said of his players, referring to COVID-19 restrictions that prohibit contact between players and playing the ball in the air.

One thing Skiba said has helped is the tip-top shape in which his players began the season, pointing out that he had more than half a dozen players score higher on a preseason fitness test than the top score from last year.

“They were certainly putting in the work to get in shape physically as well as their technical skills,” he said. “It was clear they focused on those, which is really the limit of what they were able to do during the pandemic anyway.”

The focus on skill is particularly vital in a year in which much of the physicality has been removed from the game. It also has allowed Skiba the chance to focus more on team-based activities to prepare for games. He said, across the board, the seniors have been playing well and leading the team, especially goalkeeper Kristen McCluskey.

“In our first week she was the difference, no question,” Skiba said.

Lexi Viehl also has stood out, controlling the center of the field.

“She controls the pace of the game, the tempo of the game, and she has grown so much,” Skiba said. “She was the MVP of the team last season and she has just improved exponentially and become an even more impactful player.”

The rest of the senior class has done well to complement Viehl and Butler, a junior who stepped into a starting role in the outside midfield.