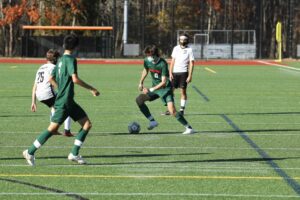 Hopkinton High School’s boys and girls soccer and cross country teams ended their seasons this weekend vs. Bellingham, with each team winning its finale.

Boys soccer closed its campaign at 2-4-4 after a 3-1 home victory on Sunday. After falling behind six minutes into the action on a penalty kick, the Hillers tied the game in the 48th minute on a goal from sophomore Sam Vasington.

On Saturday HHS dropped a 1-0 decision despite outshooting the host Blackhawks.

On Saturday the Hillers rolled to a 5-0 victory behind goals from Johanna DuPont, Ava Perlov, Alexis Viehl, Brooke Birtwistle and Kelly Teitel.

Girls cross country also posted a 15-48 victory at Bellingham on Saturday to finish the season at 4-1. Senior Olivia Jones won the race, with Hope DeLuca, Autumn Tumbleton, Katie Callery and Grace Joy in the next four spots. Greta Field and Lisa Levandovsky took seventh and eighth.

On Saturday the Hillers settled for a 1-1 tie. Sharma scored the HHS goal off a pass from Sophia Luce.