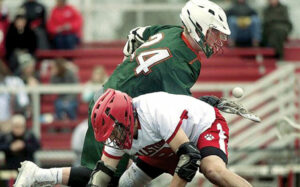 Andrew Palleiko has won more than 70 percent of face-offs he’s taken during his HHS career.

“I was trying out my freshman year and they didn’t have a face-off guy at all,” he said. “So I came in and gave it a try, and I guess I just sort of won the spot.”

The tryout turned out to be fortuitous for Palleiko and his team, as it led to four years of face-offs, multiple Tri-Valley League All-Star appearances and wins in more than 70 percent of the draws he’s taken. Palleiko is heading to MIT and will continue to take face-offs at the collegiate level for the elite academic school.

The face-off position is unique in lacrosse in that it’s a crucial part of a team’s attack, but the person doing it is not focused on scoring goals.

“My priority is winning the face-off, that’s an important part of getting possession of the ball and that helps our team’s success,” Palleiko said. “So I am willing to sacrifice some midfield runs.”

Winning the draw can be the difference between winning and losing for the Hillers, who have been to the sectional tournament for five consecutive seasons. Palleiko took the face-off at the end of regulation in a May game against Westwood, allowing his team to tie the game and send it to overtime. He won another draw in the extra session, giving his team what ended up being the game-winning possession.

“He’s clutch,” Hopkinton coach Dan Norton said. “He’s been an All-American nominee and a league all-star and he’s given us a huge advantage. We have an extra seven out of 10 possessions every game. It’s helped the team’s success and it’s not always something that gets noticed.”

So what makes a good face-off specialist? Palleiko said it’s hard to explain.

“Obviously, the first part is just stick-hand speed,” he said. “If you’re slower than the other person, you’re not going to get the ball.”

Once you get beyond speed, it can come down to technique, Palleiko noted.

“There are some kids who you might be faster than, but they have better technique or a certain thing they are doing that will make them win the ball, or the other way around,” he said. “A lot of it is knowing what works for you and being comfortable when you get over the ball.”

And, after a few dozen draws in a game, sometimes winning the ball is about wanting it more than the other guys.

“There are times when you get down and it’s anybody’s game and even if your arms are tired and you’ve taken 20 that game, you’ve got to be willing to want it and get possession,” Palleiko said.

The senior has worked hard in the classroom as well and, despite not being sure whether MIT would be a possibility, earned a spot at the Cambridge institution and plans to study biomedical engineering. He credited his parents, Ben and Pam, and his older brothers, Benjamin and Daniel, with helping guide him through the process.

“I don’t know what I would have done without them” Palleiko said. “Having two older brothers was helpful in terms of knowing the things I should focus on going into college, what tests I should take. And my parents are experienced with the whole college process.”

He will continue to take face-offs in addition to his studies at MIT.

“Now that I know I have another four seasons ahead of me, that’s good motivation to work hard in the offseason and keep my skills up to par,” Palleiko said. “College lacrosse is a big step, so I need to come in there as strong as possible.