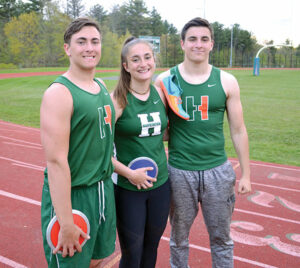 The Powers siblings, (from left) Garrett, Kate and Ben, all qualified for the state track and field meet this spring.

Hopkinton High School seniors Garrett and Ben Powers and their younger sister, Kate, knew this would be the only year they would be able to share the experience of competing together with the Hillers track and field program, and they made the most of the opportunity by putting together stellar seasons that culminated in a trip to the state meet for all three.

Garrett qualified for states in the discus with a career-best heave of more than 126 feet. Ben, who specializes in the javelin, topped 151 feet to earn his spot in the May 25 meet at Fitchburg State. And Kate, in her first year with the program, qualified for states in her second meet throwing the discus. Kate went on to win the discus at the Tri-Valley League championships on May 20 and will participate in the national freshman meet in Greensboro, North Carolina, in June.

“It’s probably one of the most fulfilling things you can have, to see your brother and your sister not only being on the same team as you, but also being successful and contributing,” Garrett said. “It’s been an honor to help Kate with the discus, going out to practice and trying to help her get better.”

Said Kate: “I really like being with my brothers and seeing them succeed.”

All three siblings have enjoyed success in and out of sports. Garrett is planning to continue his track and field career at Worcester State College on an Army ROTC scholarship. His twin brother is planning to play football at Vermont’s Norwich University, the nation’s oldest private military college, and also hopes to serve his country as a pilot with the U.S. Marine Corps.

Garrett has been a part of the track program since his freshman year. Ben joined as a sophomore after playing a year of baseball. Kate decided to join this spring when an injury kept her from trying out for the softball team. The confluence of events led to all three being together this year.

“It’s been a pleasure to see Kate hit her stride, I know she was disappointed about softball, so we wanted to make this a special year,” Ben said. “Garrett is my best friend, it’s great to see him get personal records and show how all the hard work has paid off this year and in past years.”

Said Kate: “We are all together and we are all helping and contributing to the team, which is super important.”

The siblings, who had high praise for the Hillers coaching staff of Jean Cann, Brian Prescott and Mike Donahue, may be teammates this year and supportive of each other always, but they are also fiercely competitive with one another.

“It doesn’t matter whether it’s cards, sports, grades, I enjoy watching it,” said John Powers, their father. “It’s nice to see them be competitive.”

When they are not working with the track team, the Powers siblings spend time together playing board games, training, watching sports or movies on television and playing anything from volleyball to Wiffle ball. Kate also plays volleyball, and the freshman is trying to top her brothers in terms of number of varsity letters. Ben has nine letters and Garrett has earned six in football, indoor track and outdoor track.

They also follow in the footsteps of their older sister, Sarah, a varsity volleyball player who went on to play the sport at Worcester State.

In addition to their athletic prowess, Garrett, Ben and Kate spend Sundays serving mass at St. Matthew’s and are honor students at HHS.

The two 2019 graduates have big plans. Garrett said he wants to study criminal justice and, if he does not make the Army a career, would like to work for the FBI or the Drug Enforcement Agency. Ben is looking to major in electrical engineering with an eye toward working for an aerospace company and developing military technology.

Kate said it will be “a little sad” to see her brothers off to college.

“I think the future throwers are going to be able to step up and not take the boys’ place, because they can’t be replaced, but hopefully try to fill their spot as best as they can,” she said.

Before seeing them off, John Powers and said he and his wife, Ann, were looking forward to a long day in Fitchburg to see the three compete at the state meet.

“It’s something I never thought would happen,” he said. “It’s a real treat.”