This year’s Boston Marathon might a distant memory to many people, but there is one more event in town related to last month’s 123rd running of the race.

The annual Marathon Post Party will be held Thursday, May 30, from 6:30-9:30 p.m. at the New England Laborers’ Training Center (37 East St.). For a $30 ticket, guests will receive cocktails, dinner and a commemorative T-shirt.

The event was started 20 years ago by Hopkinton Marathon Committee chair Dorothy Ferriter-Wallace as a way to celebrate the town’s involvement in the race, and, like the race itself, it has grown substantially.

“We started in 1999 with members of the Hopkinton Marathon Committee getting together informally as a way of winding down after all the months of planning for the marathon,” Ferriter-Wallace said. “Everyone wanted to get together to share their experiences and celebrate Hopkinton’s role in the start of the Boston Marathon. Over the years attendance has grown with the party being not only a celebration but also a way to thank all those involved — community partners and organizations, volunteers, town departments and officials, veterans, the BAA and residents.”

Now the event is open to anyone, although most of the attendees are either volunteers or friends and family of volunteers.

“We invite the veterans that we honor [at the start line] and the starters — everybody that’s involved,” Ferriter-Wallace said, noting that Patriots legend Tedy Bruschi (who heads a marathon charity team) and race director Dave McGillivray are slated to attend. “It’s a pretty good, diverse group that shows up.”

While there will be some presentations and videos, and Jack LeDuc will serve as master of ceremonies, the event is not very formal.

“It’s a casual night, it’s a good time,” Ferriter-Wallace said. “People look forward to it, to catch up. It’s a laid-back celebration of the success of the race, and also how well the Town of Hopkinton did. The Marathon Committee puts it together to recognize committee members, the start team, all the partners that are so vital to the success of the marathon — EMC [Dell] providing all the parking and everything up on South Street, the Korean Church opening their doors to all the elite runners, Laborers Training Center opening their doors to runners, the timing staff that is vital to the whole race, CVS, who gives us their parking lot, the schools. There’s so many people who give so much. Everybody gets involved.

“It’s just a way of saying thank you and celebrating and having a fun, relaxed evening.”

Relay for Life a local tradition 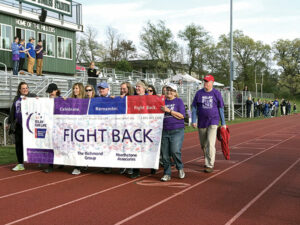 One of the inspiring moments at the Relay for Life is the survivor lap, when cancer survivors walk around the HHS track before the rest of the event participants join them.

Hopkinton’s version of the Relay for Life, an overnight fundraiser for the American Cancer Society, continues to be one of the most productive student-led events of its kind in the entire nation.

Hopkinton High School students have organized the event since its inception in 2007 and spearheaded efforts that have resulted in donations of well over a million dollars.

This year’s edition, which raised around $80,000, was held May 17-18 on the fields behind Hopkinton Middle School. The event brings together students as well as adults for the common cause of raising awareness and funds in the battle against cancer.

The event is at times fun, serious, emotional and exhausting — especially for those who stay the entire night, walking around the HHS track or participating in organized events.

“It went well,” reported organizing committee co-chair Connor Murchie, a senior at HHS. “The event as a whole was fun and very meaningful. I hope it continues to grow in our community in the coming years.” 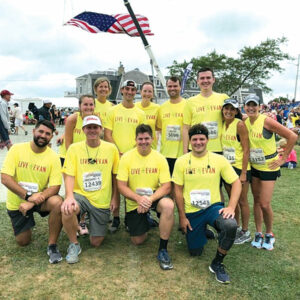 Registration for the Aug. 18 Falmouth Road Race is closed, but the Live4Evan organization has some charity bibs available.

Runners willing to fundraise on behalf of the Hopkinton nonprofit can secure a spot in the 7-mile race by contacting Live4Evan director Jack Nealon at Jack.Nealon@live4evan.org.

Live4Evan provides temporary housing for families with children who are being treated for congenital heart disease. The organization was founded in 2014 in memory of Hopkinton High School graduate Evan Girardi, who died in 2010 at age 20 from a heart arrhythmia caused by a congenital heart defect. The Girardi family had moved from California to Hopkinton to be closer to Boston Children’s Hospital.

“Our longstanding goal has always been to offer stress-free housing,” explained Evan’s mother, Barbara Girardi, who serves as housing operations director for the organization. “We want to create apartments that have all the amenities of a home and allow families to remain close to their child during such a critical time. It’s a truly incredible feeling for Live4Evan to be able to offer this. We are hopeful that there will be many more to come.”

Funds raised from Live4Evan Falmouth Road Race team — as well as the organization’s 5K Run and Fun Octoberfest and annual Red Tie affair in March — are critical in support of the group’s mission.

Chris Fay from Positive Coaches Alliance — a national nonprofit organization that works “to create a positive, character-building youth sports culture” — led the workshop that drew 51 coaches, many of whom coach multiple sports in town.

“I think one of the best parts was when Chris had us get into small groups and brainstorm about what youth players want out of their coaches,” Hopkinton Little League president Jason Mahon said. “There was a wide variety of suggestions, but apparently studies have shown that kids want the same thing from coaches and teachers — to be respected and challenged. The exercise forced everyone to think about coaching behavior from the other side and then whether they tend to meet the needs of their players. Personally, I think a bit of introspection is critical for coaching — and parenting — and being forced to examine your own behavior through another lens felt very useful.”