Hillers girls track back to unbeaten ways in spring 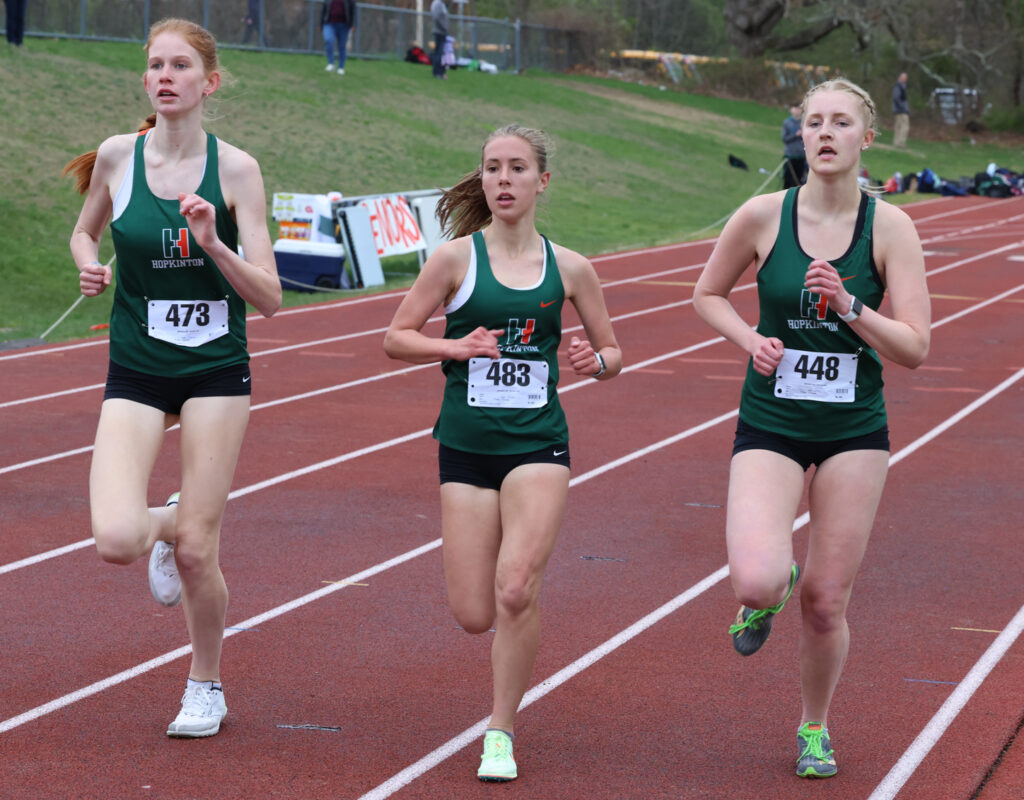 Hopkinton High School runners (from left) Avery Sawyer, Elyse Srodawa and Grace Joy head to the finish line together in the mile race during a May 3 meet vs. Westwood. PHOTO/JOHN CARDILLO

Hopkinton High School girls track and field coach Jean Cann describes the spring season as a “step up” from where the program was during the indoor season, but she is holding the program to its high bar of never losing a meet.

“We have gotten our act back together,” Cann said. “We got into a funk during indoors and we were not up to our usual standards and we were missing people, as most teams were.”

The Hillers rolled through their five dual meets unbeaten and looked poised to win another Tri-Valley League crown. The program has not lost a dual meet during the outdoor season since Cann took over, a streak that dates back at least seven years.

The team success has been the product of great individual performances. Throwing star Kate Powers broke her own program record in the discuss in the first meet of the season. In addition to coming out on top in the throws, she has been regularly placing in the sprinting events.

After playing basketball during the winter, Kiki Fossbender has been competing in the 100- and 200-meter events, along with the long jump, and routinely places in all three.

Hopkinton’s middle distance crew has been yet another strength. Bethel Flanagan is running the 400 and the 800, setting a personal best in the latter event and putting together a near-undefeated campaign in the former. Flanagan also has anchored the 4×400 relay team.

Steph Johnson has been another cog in the middle distance wheel after standing out in both the 1,000 and the 600 during the indoor season.

“She and Flanagan are a really good one-two punch,” Cann said.

Grace Joy has placed consistently in the mile and the 800 while Katie Callery has been a scorer in the mile and 2-mile. Autumn Tumbleton, Carmen Thomas and Kiley Locke also are reliable contributors.

Freshman Elyse Srodawa has emerged as a top distance runner, and Shelby Jones has been strong all-around.

“Shelby started doing the hurdles in indoor and she has continued to be strong during outdoor in the sprints and in the shot put,” the coach said.

Javelin thrower Sarah Furlong is eclipsing 100 feet and has helped in the success of Elena Davies, who is competing in the event for the first time. Despite the inherent individual nature of track and field, Cann said the Hillers are eyeing some significant team goals as the season reaches its peak.

“We very much consider this a team sport, we don’t consider it an individual sport at all,” she said. “People are going for individual times, but we definitely emphasize the team aspect of it, even when we get to the higher levels. We are always trying to get the best team finish we can.”

After winning the TVL Large Division title, the Hillers were hoping to capture a victory in the TVL Showcase Meet on May 17. Cann also is hoping for a top-five finish in the state meet.

“We are always trying to peak for the end of the season,” she said. “It’s a more accurate depiction of who the strongest team is when you get to the end of the year.”