Huge Hillers boys track team back on top of TVL 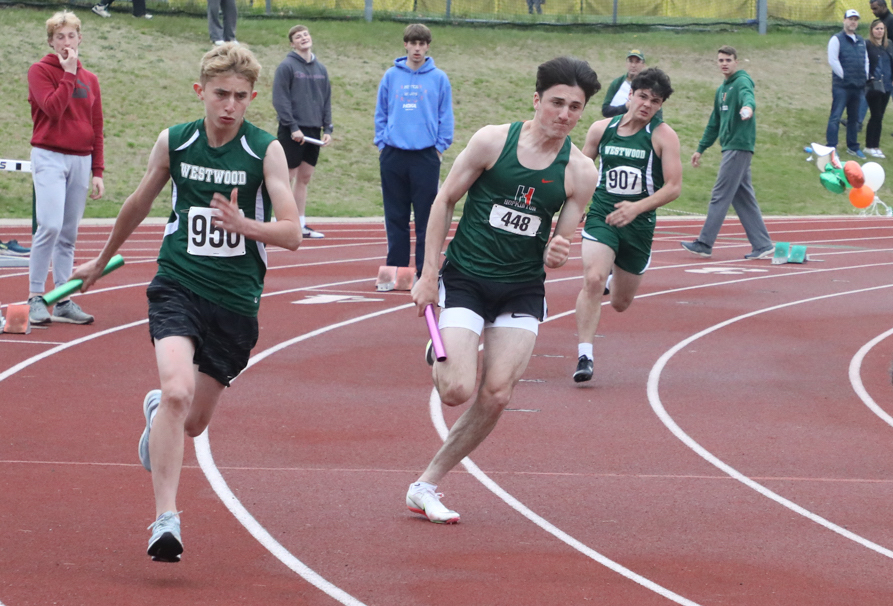 Junior Sean Golembiewski ranks at the top of the league in multiple events. PHOTO/JOHN CARDILLO

After a canceled spring track and field season and another one significantly impacted by the ongoing COVID-19 pandemic, Hopkinton High School boys coach Brian Prescott is enjoying being back in the midst of the chaos that comes with leading a 130-athlete team.

“It’s hectic, we have competitions throughout the week and on the weekends and we have the largest track team we have ever had,” Prescott said. “It’s been a challenge, but it’s been fun.”

Part of the enjoyment for the Hillers has been in winning. Hopkinton has at least one athlete in the top 15 in the Tri-Valley League in every single event, and HHS athletes top the league rankings in multiple categories. Hopkinton swept all five of its dual meets to win the TVL Large School Division and looked to stay on top at the May 17 TVL Showcase Meet.

While the meet does not technically determine the league champion, Prescott said the coaches and athletes do not necessarily see it that way.

“Dover-Sherborn won that meet last year and it really felt like we came in second in the league,” he said. “That’s how I viewed it and that’s how I have been preaching it to the kids. We have to get past D-S in the league meet.”

Hopkinton has several top-level athletes who were looking to help the team do just that. Junior Sean Golembiewski has been the program’s top standout this spring. He is first in the TVL in the 100-, 200- and 400-meter events and a member of the 4×100 and 4×400 relay teams that are the best in the league.

Golembiewski also is in the top five in the high jump, and Prescott expects he can crack the top 15 in the high and low hurdle events even though he has never done them before.

“He is a pretty special athlete, it’s nice to have him on the team, but I don’t think any of the coaches can take any credit for his talent,” Prescott said. “He is unique in his ability and he also works harder than anybody else. He shows up early, he leaves late, he helps lead the other athletes.”

The junior captain, Prescott added, “is an athlete we can put anywhere.”

Hopkinton also has received significant contributions from twins Drew and Will Bialobrzeski, both of whom have risen to the top of their events. Wyatt Ruff and Matt Burdulis have helped lead a strong contingent of distance runners. Russell Perryman is near the top of the TVL standings in the javelin.

“We have a smattering of guys in the top 15 in every event,” Prescott said.

Another key for the program’s success this spring, given the sheer number of athletes, has been the leadership of the seniors and captains who Prescott described as “really positive role models.”

Neil Abraham, Colin Davan, Declan Mick and Craig Salois are captains this spring along with Golembiewski.

“With so many athletes on the team, we have really asked the captains and the seniors to do more in the way of coaching and organizing and supporting the younger athletes than they have had to do in the past,” Prescott said. “They have stepped up well, it’s a super fun team to be around.”