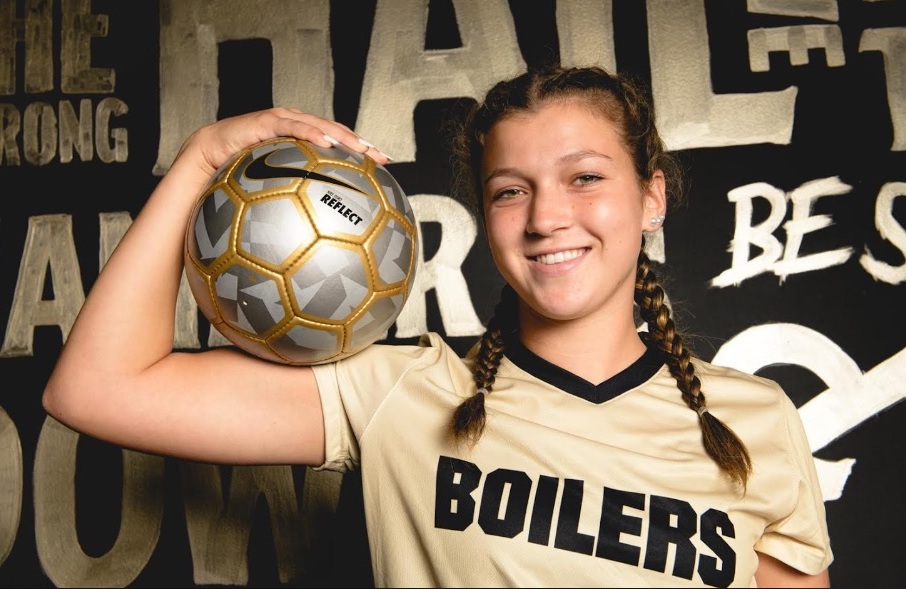 Hopkinton High School junior Brooke Birtwistle will continue her standout soccer career at the Division 1 collegiate level in two seasons when she attends Purdue University. Birtwistle, 16, is one of the Hillers’ captains this fall and said the Boilermakers provided for her the best combination of athletic and academic opportunities.

“My goal was to be offered a scholarship by a school that was highly ranked in the NCAA D1 for soccer and that was also highly ranked academically,” Birtwistle said. “My parents and my coaches had always recommended that I commit to a school that had a balance, as it’s important that I think about my longer-term career and not just about soccer.”

Birtwistle said she also visited Louisiana State University and Brown University and was impressed by both. The trio of great options did not make her decision any easier. Birtwistle said Purdue stood out, however, because the school’s coaches were the first to reach out to her and made it clear that they wanted her to be a Boilermaker.

Purdue’s coaches kept in touch with her club team coaches throughout the recruiting process until they were officially allowed to have contact with her under NCAA rules.

“Once they were able to talk to me, the coach and staff told me where they saw me fitting into their program, and that they see me as a very important player for them,” Birtwistle said, adding that Purdue sees her playing either defense or midfield.

Purdue also was very welcoming during Birtwistle’s visit to campus with her mother, Marsha. She said her mother, her father, Nigel, and her older sister, Trinity, have been very supportive of her throughout the college search process.

Birtwistle said she is excited to see how far she can go in soccer and to be pushed to be the best player she can be, as well as to be the best version of herself academically.

“If I could, I would want to play for as long as I can,” she said. “At Purdue, I want to study sports medicine, so I would be surrounded by soccer even if I don’t go that far. But my goal is to go far with soccer.”

Birtwistle said she could envision using her sports medicine studies for something related to being an athletic trainer or a personal trainer.

“I definitely want to be surrounded by the athletic field, because I have been in it so long,” she said.

While certain aspects of her future are coming into view, Birtwistle is setting her sights on having a strong season with Hopkinton this fall. She was named a Tri-Valley League All-Star honorable mention a season ago and is in her third season with the varsity team. She said she was especially proud of being named a captain despite only being a junior.

Birtwistle said she is poised for a breakout season.

“I think not only for me, but for my team as well,” she said. “We have known each other for some time and we all jell pretty well and our practices have been good. We can only get better from here.”

She said her goal this season is to help her team get back to the state tournament.

“We want to make it as far as we can and have fun,” Birtwistle said. “If you don’t have fun, you’re not really doing it right.”