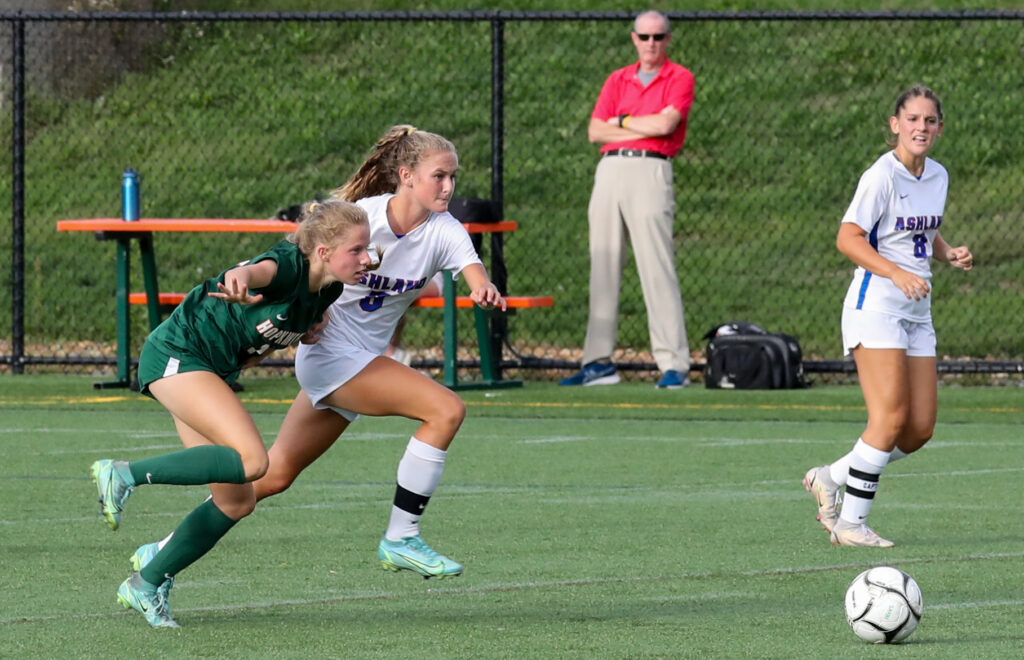 Madison Recupero (left) and the Hillers are in pursuit of league supremacy. PHOTO/JOHN CARDILLO

For Hopkinton High School girls soccer coach Tom Skiba, it’s all about the process. His expectations for his team coming into the 2022 campaign are similar to every season: win games, get to the state tournament and compete in the always-challenging Tri-Valley League Large School Division.

But the Hillers also have an array of process goals. Among them is possessing the ball for an average of 60 percent of each game. Another is for 70 percent of Hopkinton’s shots to land on goal. And HHS is hoping to concede fewer shots than it takes each game, which can lead to giving up fewer goals.

“We look at these process statistics as a way that we get to scoring goals and get to winning games,” Skiba said.

Skiba figures to have plenty of players familiar with his process, with 14 returning from a roster that made the state tournament a year ago.

“The team is looking good,” he said. “It was obvious they worked hard during the summer and they came into the year in shape and their skill level has been really good. They put in a lot of work doing the offseason.”

Junior Georgina Clarke is back as a striker up front and figures to be a key cog in the offense.

“She is very athletic, very skillful, and she will take on players one-on-one when she gets the ball,” Skiba said. “She gets the vast majority of her shots on goal.”

Brooke Birtwistle, another junior, is one of the team’s captains. The Purdue University commit is in her third year with the varsity roster and will be the team’s center back.

“She is a tall, very athletic player that has excellent skills for a player of her size,” Skiba said. “We are counting on her not only to anchor the midfield but also to be someone who helps to organize our overall defense.”

Nina Tzouganatos and Madison Recupero will be two of the core midfielders this fall.

“They are very similar in how they play,” Skiba said. “They are quick, skilled players and they will be two of our best playmakers.”

Several players are looking to take on bigger roles this year, including seniors Ellie Driscoll, Kylie Skiba and co-captain Emerson Joy. The Hillers also have the benefit of bringing back their goalkeeping tandem from a season ago with co-captain Elizabeth Herlihy and Ana Tomas returning.

“They are both seniors and we will need both of them to step up so we can solidify our defense,” Skiba said.

As Hopkinton competes in the TVL this fall, Skiba said it is difficult to single out any of the teams as top competition with so many opponents likely to field strong rosters.

“Medfield is always a very good team. I could say the same about Holliston and Westwood and it doesn’t get any easier with the TVL Small with Medway and Dover-Sherborn,” he said. “There was a day last year when we all played and the TVL Small beat every single TVL Large team, it’s a credit to the quality of play in our league.”