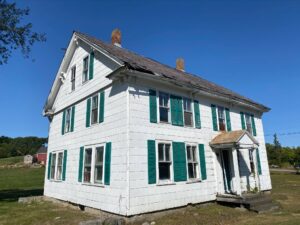 The decaying 19th century-era house at 83 East Main St., sitting on a parcel of land next to Weston Nurseries, was the primary topic of discussion at Tuesday night’s Historical Commission meeting, with members agreeing to reach out to developer Roy MacDowell to see if they could agree on a reasonable solution regarding its future.

As part of the contract with the town when he purchased the land from Weston Nurseries for the Legacy Farms development, MacDowell agreed to preserve and repurpose the historic building, estimated to have been built around 1875.

Two years ago MacDowell, who had pushed to demolish the house and build a replica, agreed to the commission’s request to restore the home. However, the commission has softened its stance, especially with the house continuing to deteriorate.

“What we determined [at a previous meeting] in June is pending resolution of the debt between Legacy Farms and the town of Hopkinton that we would make inroads or solicit the property owner, Roy MacDowell, in a dialogue to offer an opportunity to do what I will call the Chesmore [Funeral Home] model, basically replace in kind,” chair Mike Roughan said. “No action was taken pending resolution of the debt. Now that the debt has been reconciled, I think it’s time to take action.”

The commission designated member Eric Sonnett to get in contact with MacDowell and find out what he is thinking. According to one commission member, MacDowell previously expressed a desire to construct a large addition and use the properties as office space or perhaps mixed use, although it’s not clear if that might have changed due to the current economic climate.

Roughan noted that the commission could request that MacDowell be charged with demolition by neglect — essentially demolishing the house without approval — but he would prefer to avoid that aggressive stance and instead try to work with MacDowell to replicate the house.

“The form, the character, the proportions of 83 East Main St. are worth replicating. But they don’t have to be in the same materials,” Roughan said. “It can be replicated. I offer what the Chesmores did on their barn as an example of that replication. The terms I would advocate are that we would want architectural drawings submitted to the Historical Commission, that upon review and approval by the commission we will write a letter to the [Select Board] and to the Planning Board saying that the requirement — and I’m forgetting the term of the original Planning Board agreement, but under the original terms, Legacy Farms was required to maintain and preserve the property at 83 East Main St. What I’m going to advocate, if everything goes as we’re suggesting, is the commission would vote to ask the Planning Board and [Select Board] to rescind that requirement and replace it with a replace-in-kind structure based on the architectural and engineering drawings provided by Legacy/Roy MacDowell.”

In his push to demolish the house two years ago, MacDowell said that it had been altered so much over the years that the only original pieces of the structure are the framing inside. MacDowell previously was granted approval for a request to tear down a garage and smaller addition. Now the main house sits alone, standing guard at the base of a 0.6-acre, triangular plot of land off Main Street, awaiting a decision on its future.

Said Roughan: “It is an iconic location, it’s the top of a curve. The structure is, for me, a legacy Victorian farmhouse style that is consistent with a lot of other structures in town. It represents an era that I think deserves to be preserved. The problem is, what is the best use.”