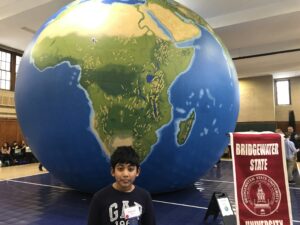 Do you know the names of the administrative regions of China? Do you know where the Laptev Sea is located?

Vijay, a student in Michael Siedlecki’s social studies class, will be representing his school as one of the semifinalists in the 2019 National Geographic GeoBee Massachusetts State Competition held at Elms College in Chicopee on March 29.

Vijay made it to the prestigious competition after winning the GeoBee in his school last month. The National Geographic GeoBee competition, which is in its 31st year, starts its first round with fourth- through eighth-grade students throughout the state competing to determine each school champion. School champions then take an online qualifying test, which they submit to the National Geographic Society.

The National Geographic Society invites up to 100 of the top-scoring students to compete in each state’s GeoBee.

Although Vijay is new to the district, this isn’t the first time he has advanced this far Last year, as a fifth-grader in Chelmsford, he took fifth place at the state championship after going into a tiebreaker round with the finalists.

Vijay will be preparing for this year’s big event doing the thing he loves the most: reading atlases and maps as well as books on faraway places.

“I really like studying geography and learning about different places,” he said. “It’s fun for me.”

His father, Jeganathan, said that his son’s love of learning about the world has gone as far back as kindergarten.

“One summer vacation he said he was bored so I asked him to memorize all of the U.S. capitals,” the elder Vijay said with a laugh. “I couldn’t believe it when he came back to me saying he knew them all. I didn’t believe it until I quizzed him.”

Since then, Abhishek rarely can be seen without a map in his hand, according to his family, and loves to do daily quizzes online on the National Geographic website. He also plays the violin and collects currency from different parts of the world.