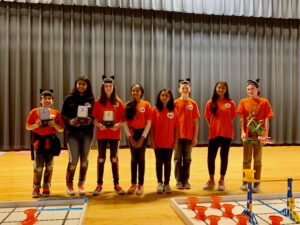 The Hopkinton Middle School RoboHillers will be heading back to the Bluegrass State for the fourth year in a row after one of their robotics teams qualified for the VEX IQ World Championship.

“It was amazing that they accomplished all of that at the regionals,” said Pat Allen, the robotics coach for Hopkinton Middle School. “I was so impressed by their STEM project. They blew me away, and they clearly blew the judges away, too.”

The RoboHillers are an after-school activity for students interested in robotics and STEM (science, technology, engineering and math) subjects. Students design, build and program robots to compete in matches against other robotics team throughout the state. The RoboHillers have been working on building their bots since August, and they currently have close to 60 students in Grades 6-8 participating on seven different teams.

“Five of our teams made it into the top 10 finals match [during the New England Regional],” said Allen, who commended the students for their hard work over the past seven months. “Our teams 1715B and 1715D were paired together in the finals and tied for second place.”

Team 1715C, made up of HMS students Dylan Striek, Disha Mudenur, Rylee Blair, Shrija Kumar, Surina Tripathi, Samuel Porter, Hansika Pitchuka, Chris Burton and Jacob Dold, will be heading to Kentucky for the VEX IQ World Competition from April 28-31. There they will compete against other robotics teams from around the globe and present their STEM project, “A Solution for Summer Drought in Cold Climates,” a hypothesis that building a large enough snow structure in the winter could conserve water that could be used during summer months in drought-plagued areas.

This is the fourth year that Hopkinton has had a robotics program at the middle school. In addition to serving as a feeder program for high school robotics, it has become more and more popular every year.

“As robotics become more ingrained in curriculum and students go to these events and see how exciting they can be and start to see how it can be their ‘sport,’ it will continue to grow,” Allen said.

And in the four years that she has coached, Allen has seen middle school robotics blossoming in the state of Massachusetts.

“This is the first year in a while that only one of our teams qualified for the worlds,” Allen said. “It speaks to how competitive robotics has become in this area.”

Although the regular season is over, the RoboHillers will be working to help prepare team 1715C for the World Championship next month, including assisting in fundraising efforts to help defray the cost of the trip.