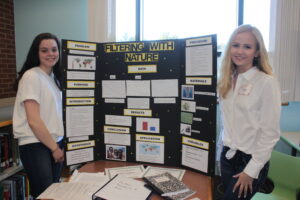 Page Leighton (left) and Shaye Butler did a presentation on the effects of certain plants on removing contaminants from water.
PHOTO/MELISSA ORFF

The cure for cancer, the answer to universal clean water, and the end to addiction all could have their starts at Hopkinton High School.

Potential future scientists presented their research and findings on these topics and more during the annual Hopkinton High School Science Fair on Feb. 26.

The students presented their projects in the media center to a large crowd of classmates, parents and community members, while judges had to decide which projects would represent HHS at the regional fair at WPI.

“We wanted to have a science fair project that would benefit our school,” Rozy said. “We found that something as simple as changing the color around you can affect test scores.”
Although it took months for the students to do research and experiments and map out their presentation, the science fair left the two young men eager to explore their topic further.

“It was fun and a great starting point,” Rozy said. “I really hope to do more of this in the future.”

Paige Leighton and Shaye Butler, both Sophomores, decided to focus on an issue that affects over 780 million people across the globe — access to clean water.

“In freshman chemistry we learned about the water crisis and how plants can remove contaminants from water,” Leighton said. “We learned about it in class, but didn’t have time to go into it more deeply because of time.”

Wanting to explore this issue further, the two chose to study the effects of duckweed and water hyacinth in removing contaminants in water.

“We found out that water hyacinth did do it faster then duckweed, but they were both very effective,” Butler explained.

The girls chose to be a part of the elective science fair program as they both are interested in math and science and in seeing where the subjects may take them.

“It may be a big part of our futures,” Leighton said.

Sophomore Fariha Fardin, whose project was chosen among 12 others to move on to regionals, was curious to see if green tea could, if fact, cure cancer. Fardin did months of research on her project, including visiting a working lab at MIT.

“It was a great networking opportunity,” Fardin said. “I am hoping to go into the medical field someday.”

This year’s event was the biggest fair in the school’s history with 97 “curious and motivated” students participating.

“It has been so much fun to see them throughout this whole process,” said HHS science teacher and fair adviser Kristen Murphy. “The fact that they take time to pursue their passions makes me so optimistic for the future.”

The top three winners were:

The following students and projects also were chosen to move on to the regional competition: