By Linda Connelly
Special to the Independent

I ended my research project “Hopkinton 1918,” which ran in the previous issue of the Independent, concluding that the town’s Annual Report of 1918 indicated that only two lives were lost to the influenza epidemic of that year, and I made the assumption that perhaps seven more people who were listed in the report as having died from pneumonia likely succumbed to the so-called Spanish flu as well.

What I did not know then but have since discovered is that a family of English/Irish immigrants lost three daughters within a two-week period to the disease. I did not find mention of it in the report, nor in a newspaper obituary. I came across the gravestone images by using Find-A-Grave, an internet platform that lists and shows images of graves, gravestones and memorials. I used Ancestry.com to add more information to provide a more detailed picture of that Hopkinton family.

In 1900 a family of eight lived at a rental property at 158 Main St. The father and “head of household” was Daniel Sullivan. He was born in England in 1863 to Irish parents who emigrated to England, likely trying to escape famine and poverty in Ireland. Daniel and his family were firmly settled in Hopkinton by 1900. In the census he was listed as being able to read and write and was employed as a “farm laborer.” His wife was Johanna, born in Ireland in 1863 and whose maiden name was Sexton. She and Daniel had six children, five daughters and one son, with ages between 9 months and 10 years. Ten years later, in 1910, they still lived on Main Street and all children were in Hopkinton schools except Margaret, who was a wage-earning apprentice in the field of nursing.

Margaret Josephine, the Sullivan family’s eldest child, was born in 1890, perhaps in Framingham, maybe in Hopkinton, and tragically died at age 28 during the second wave of the pandemic. She is described as being an army nurse in the Nurse Corps, and her death notice recorded her life as ending in the town of Harvard, at Fort or Camp Devens, a training and demobilization site for soldiers during WWI (Devens was carved out of five towns, one being Harvard). Margaret was employed at this site, which by September of that year had become an epicenter for the virus in Massachusetts, the international war thus being a large factor for the worldwide spread of the virus. She enlisted on Aug. 15 and died a month later, on Sept. 18. The Massachusetts Death Index listing of 1918 in Harvard has her name written in cursive script among columns in a log book listing names of dozens of male soldiers, all in their 20s. Although the reason for hers and their deaths was noted as pneumonia, it is safe to say that these young people succumbed to the flu epidemic of 1918. For reasons that are still debated today, the virus was particularly lethal for younger people. 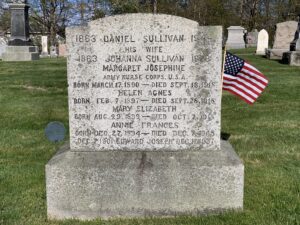 The family gravestone in St. John’s Cemetery shows that three Sullivan daughters died within two weeks of each other in 1918. PHOTO/JERRY SPAR

Margaret must have been in physical contact with her sister Helen Agnes, who was seven years her junior and at age 21 died 10 days later on Sept. 28. I discovered that her place of death was not Hopkinton but rather was recorded as Springfield. I then learned through internet searching that a tent city was erected by the state militia at a place called Forest Park in Springfield to quarantine and treat 229 victims of the Spanish fu. Helen died in that encampment, where she would have been cared for by female Red Cross workers. Her last days would not have been on Main Street with her family but instead in and among rows and rows of military tents and among sick and dying strangers. There are images of the nurses at that outdoor facility holding masks and behind a sign reading “Put your old mask here” (apparently masks were boiled in order to sterilize them). There were seven such camps in Massachusetts at that time. How utterly sad for the family!

Mary Elizabeth Sullivan succumbed to the flu four days after Margaret, at 19 years of age.

I was able to find her listed in a death index but have not uncovered details about her death, such as place of and cause of it. It is certain, however, that she followed her sisters, because her name is recorded in the family plot as having died Oct. 2, 1918.

The remaining family relocated to Framingham just two years later where they finally bought a home and where Daniel changed work from farm laborer to woodworker. There was a Sullivan family next door, likely Daniel’s son and his family. The mother, Johanna, died in 1929, 11 years after her daughters. Daniel lived on to see the start of the next World War before he died in 1944. The two remaining sisters did not marry. They all came back to Hopkinton only upon their deaths and were buried along with Margaret, Helen and Mary at St. John’s Cemetery.

The granite marker has “Army Nurse Corps” inscribed below Margaret’s name. Her sisters’ names, birth dates and death dates are below hers. There also is a memorial stone — it has a Latin Cross and lettering in flat bronze — honoring Margaret for having given her life as a World War I nurse. Apparently in 1961 her sister Katherine D. Sullivan, who had relocated to West Central Street in Framingham, requested that her sister be remembered in that way. The digital form I uncovered was an application for a headstone for U.S. military veterans filled out and signed by her sister.

None of this tells what it was like for a family to lose three young daughters in a matter of days. There have been records, rumors, movies and stories of brothers dying together in wars, but I did not know that such a tragic set of circumstances occurred in my town 102 years ago.