Hopkinton friends bring stories of hope from around globe 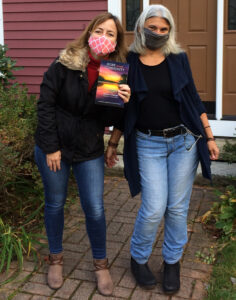 Cynthia Franca (left) and Cheryl Perreault compiled a collection of stories in response to the pandemic.

As we weave our way through the difficulties of the pandemic that has affected us all in one way or another, Hopkinton residents, friends, and editors Cynthia Franca and Cheryl Perreault have compiled a collection of stories, poems and images from people around the world with messages of hope — something everyone could use a little dose of right now.

“Hope through Community: Words and Images in Response to a Global Pandemic” is a collection of writings from individuals and their response to the pandemic and quarantine, as well as other challenges in life. The book includes photos from the Front Steps Project, for which several photographers contributed their images of families posing in front of their homes during the pandemic/times of quarantine.

The journey to completing the book began nearly eight months ago. However, it was just over seven years ago when the two ladies met at a Women’s Art Forum that Perreault organized, and they formed what seemed like an instant friendship.

“We became very good friends,” Franca explained. “We realized we shared common interests in community as well as creativity and art.”

Perreault said she immediately realized a connection between her and Franca.

“As women who both love art, I recognized a bright star in her,” Perreault stated.

When Massachusetts began its lockdown in March, Franca decided she wanted to do something special for her neighborhood and delivered more than 100 notes to homes with messages of positivity.

“They said, ‘Stay positive,’ ‘Be strong,’ ‘We’re all in this together,’ ” explained Franca. “I think it provided some much-needed cheer.”

Consequently, the gesture got Franca to thinking about a broader way to spread different messages of hope through such a trying time.

Around that same time, as the pandemic was becoming more and more of a long-term realization, Perreault said she, like so many, was feeling helpless.

“I was feeling like I was retreating, being still, just feeling lost. When Cynthia brought up her idea, it just seemed to click with me,” Perreault commented.

Through their connections and social media, the two invited writers, poets and photographers to share uplifting writings and images of hope as they faced the pandemic. The first response they received was from a man in Australia who sent in a poem he wrote.

Over time, Franca and Perreault received 120 responses from individuals who lived as close as the Metrowest area and as far away as Africa. A poet from California who had one of his poems sent into space by NASA also responded.

“Hope through Community” contains 72 contributions that are both diverse and moving, from both young and old. The book is available for $20 at Hopkinton Drug, or an autographed copy can be ordered by emailing the authors at hopkintongenerationbook@gmail.com. It also can be ordered online at HopkintonThroughPoetryBook.com.

Proceeds from book sales will be donated to charitable organizations assisting with hunger, including Project Just Because in Hopkinton, Feeding America, and Action Against Hunger.

A virtual launch party for “Hope through Community” will take place on HCAM-TV on Friday, Dec. 4, beginning at 7 p.m.

Perreault said a friend of hers is reading the book to someone who is homebound, and the stories and poems initiate meaningful conversations after they are read.

“It’s very uplifting to hear how the contributions of all the writers goes forward; not only representing their art of hope but inspiring conversations related to hope that others want to share as well,” she said.