State Rep. Carolyn Dykema, along with Hopkinton veteran Mike Whalen, started a program to recognize local veterans who are working in the public sector. The campaign is called “Hopkinton in Service.”

“These roles are crucial to protecting the community and its residents as well as enhancing civic life,” Dykema said via press release. “Each veteran’s story is unique, but what they have in common is that they have chosen to serve in the military, and pursued a career in service, in order to contribute to the greater good.”

Resident John Sherffius designed graphics for each of the veterans. The graphics incorporate an image of the American flag taken from an old photograph of Hopkinton’s World War I Doughboy statue and flagpole.

Anyone who would like to suggest a Hopkinton veteran who continues to serve locally to be included in the campaign can contact Dykema at carolyn.dykema@mahouse.gov or 617-722-2680, or email Whalen at Michael.Whalen@va.gov. 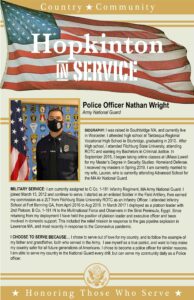 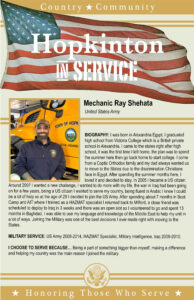 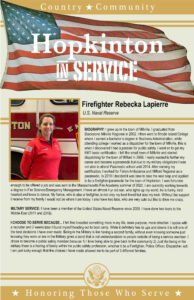