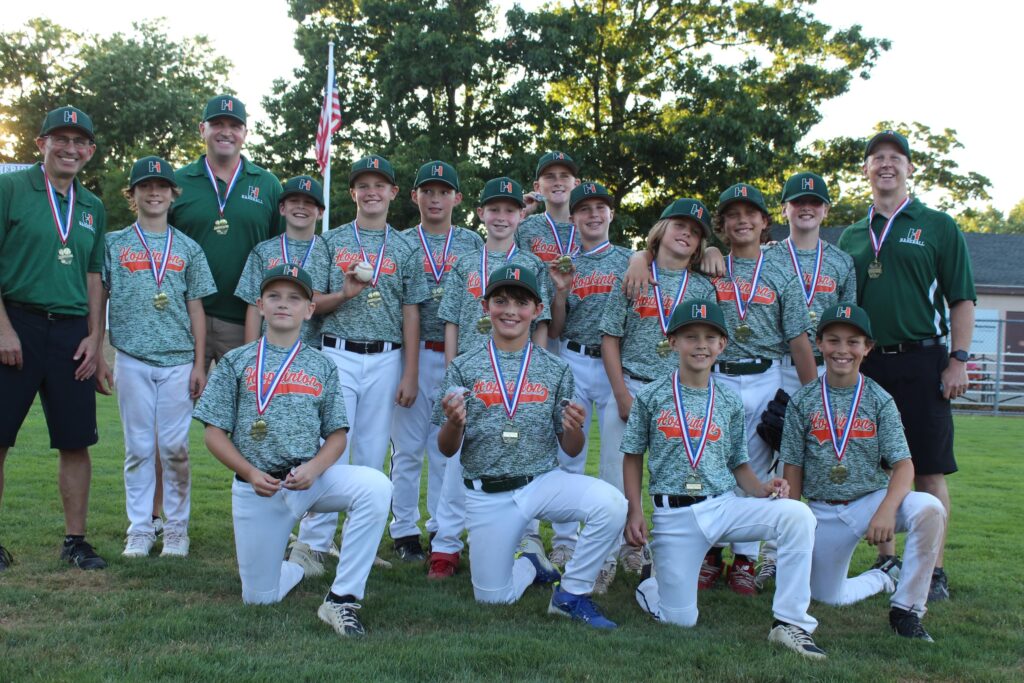 Members of the Hopkinton Little League 11-and-under team show off their medals after one of their tournament titles this summer.

The Hopkinton Little League 11-and-under baseball team had an eventful summer, winning the state championship as well as the Tondorf Tournament — despite sometimes having to play in two tournaments on the same day.

Hopkinton had not fielded a team in the 11U state tournament previously, but coach Scott Hodne decided his team could benefit from participating — in part because it would prepare the players for next year, when they will be eligible to compete for a spot in the Little League World Series.

“We played a lot of good teams and had some fun,” Hodne said. “We got some good pitching performances and some clutch home runs.”

The team started its season June 18 and wrapped it up Aug. 3.

Hopkinton went 12-0-1 in the annual Tondorf Tournament, which was hosted by Medway, and swept Ashland in a best-of-three final series.

Meanwhile, the team also competed in the district tournament in mid-July and went undefeated. In the championship game, Hopkinton took an 8-0 lead but Walpole came back to make it 8-6 before Carson Polsinello shut the door with two scoreless innings of relief pitching.

Between July 9-17 the team played 11 games in nine days between multiple tournaments.

After winning districts, Hopkinton advanced to the sectional tournament and swept its way through that as well, defeating Parkway, Melrose and South Boston in pool play before posting a 16-0 victory over Parkway in the final. The final was played on the same day as Hopkinton’s Tondorf semifinal, but that didn’t slow down the team at all.

The state tournament, played in Medfield, drew Cohasset, Reading and East Longmeadow. Hopkinton took down Cohasset 15-4 in the semifinals and blanked Reading 10-0 in the title game.

While the scores might look lopsided, Hodne said the games were challenging. In the semifinal, Cohasset scored four times in the top of the first inning — before an out was recorded — putting Hopkinton in a rare deficit.

Hodne’s son, Trevor, was the starting pitcher, and he refused to get rattled.

“I went out to talk to him and he said, ‘They’re not scoring again,’ ” the elder Hodne recalled. “I said. ‘OK, well, keep throwing strikes, maybe change it up a little bit.’ ”

Hopkinton roared back with five runs in the bottom of the first inning — most of the damage coming courtesy of a three-run home run from Connor Moore — and never looked back en route to an 11-run win.

The state title qualified Hopkinton for the regionals, with other state champs from the Northeast part of the country. Hopkinton finally suffered its first loss of the summer in that tournament (played in Beverly and Danvers), dropping a 6-0 decision to a team from Massapequa, New York, in the opener. Hopkinton bounced back to beat Connecticut in its second and final game, rallying from a 7-1 deficit in the fifth inning in the process.

The team’s overall summer record was 24-1-1. Because there were so many games in a short time frame, Hopkinton relied on its depth, using a higher number of players to pitch than would be typical.

Trevor Hodne, Carson Polsinello, Patrick Reilly and Connor Moore were the team’s top pitchers, while Jack Monopoli “came on strong in his first year on the team, and he’s a decent hitter, too,” the coach said.

Cam Nelson, the team’s starting catcher, broke his wrist early in the Tondorf Tournament, “but he went to every game and supported us,” Hodne said. “We gave him the game ball after the sectional championship.” Nelson was cleared to return before the team’s final game in the regional tournament and contributed in the win over Connecticut.

The team will be recognized before a Red Sox game on Sept. 17 along with 12U state champion Middleboro — which won the New England region and advanced to the Little League World Series.