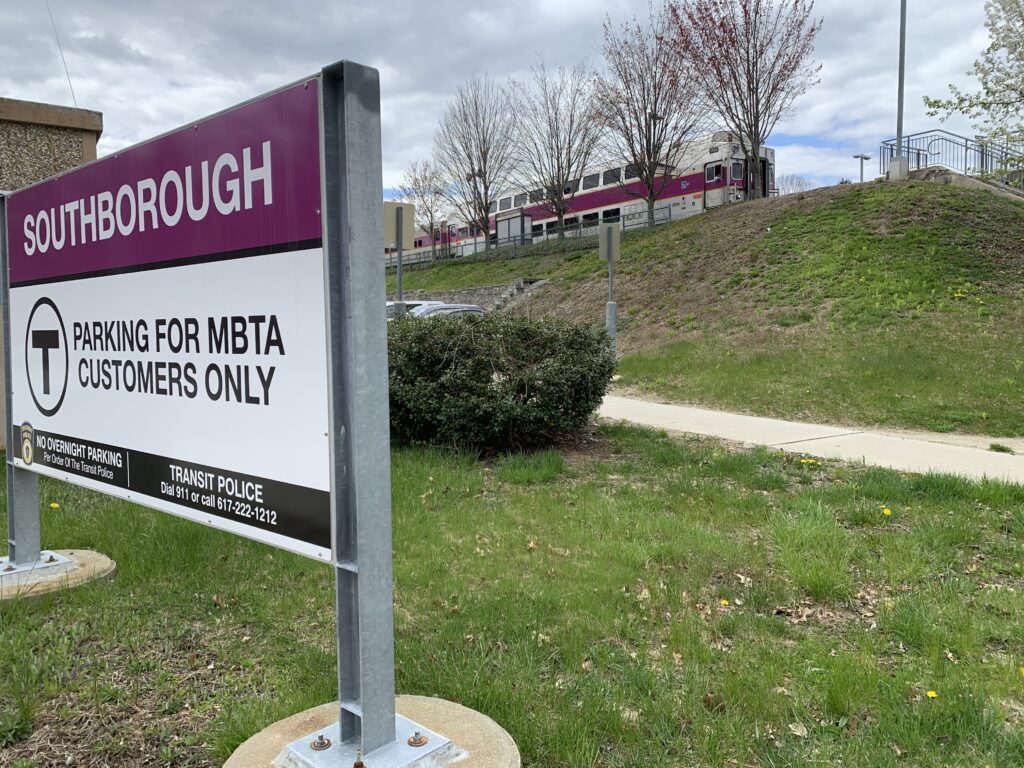 Hopkinton’s proximity to the Southborough commuter rail station qualifies the town as an MBTA community and makes it subject to new state laws designed to increase housing near public transit. FILE PHOTO/JERRY SPAR

The Planning Board at its meeting Monday night learned about an update to a state law designed to create multifamily housing opportunities in communities served by the Massachusetts Bay Transportation Authority that the town will need to consider if it wants to be eligible to receive three sources of state funding.

Principal Planner John Gelcich explained that the final guidelines for compliance with the state’s housing choice initiative to create zoning districts for denser housing near public transportation were released earlier this month. In this version, Hopkinton no longer is designated as an MBTA community but has been deemed an adjacent community, which lowers the threshold for density requirements to a minimum of 750 units.

In an earlier version, Hopkinton was considered to be an MBTA community because of its proximity to the Southborough commuter rail station, which would have required 997 units of multifamily housing not more than a half-mile from the station.

“The second major change is that the district doesn’t necessarily have to be within half a mile of the train station,” he added. “It can be anywhere in the town’s borders, so that opens up a lot more possibilities for where we can locate this district in town.”

He stressed that this initiative only calls for zoning districts for multifamily units to be created — not for their actual construction. There are restrictions as to where the zoning can be located in order to protect wetlands and conservation land, and age restrictions cannot be placed on these developments. The state will review proposed multifamily zoning districts.

“The requirement for this program is that you have the zoning in place,” he said. “Not that people are actually developing the units.”

Chair Gary Trendel asked if any of the current units in Hopkinton would qualify. Gelcich said they would not because they required zoning relief rather than being by right.

Communities that do not comply with this initiative will not be eligible for three sources of state funding — the Housing Choice Initiative, the Local Capital Projects Fund and the MassWorks infrastructure program.

Member Rob Benson expressed his displeasure with the policy and wondered how beneficial it would be for Hopkinton to implement it.

“I honestly believe there’ll be no support across the town for this district,” he said, noting that the funding Hopkinton would be eligible for through those three programs would be “less than half a percentage point” of the town’s budget over a 10-year period.

Said Benson: “This is like trying to force a poison pill on the town.”

Trendel cautioned for a more open-minded approach at this juncture.

“This could be something that might be beneficial to the town,” he said. “We know that affordable housing — obtainable housing — is a challenge.”

People who live in apartments might also be more likely to frequent restaurants and businesses, which would impact the local economy, he noted. This type of housing also is designed for residents to be less dependent on cars.

“Whether or not that funding is worth it or not is up to the town,” Gelcich noted. “But I think we need to exercise the option to give the town the option to vote it up or down.”

Member Paul Ostrander said it is “very important to have an open mind” as the members learn more about the policy and the housing shortage. Mary Larson-Marlowe, who also serves as the Planning Board’s representative on the Zoning Advisory Committee (ZAC), agreed and asked about the extent ZAC should be involved in the process.

Trendel initially recommended that it go through ZAC. Because it is a state policy, Gelcich suggested the board prepare a recommendation to ZAC “rather than have ZAC start from scratch.” Larson-Marlowe suggested that there be joint discussions because it is a “unique scenario.”

“Regardless of what our recommendation is, this is going to be a tricky, messy project,” Trendel added. “And it’s going to take a lot of public engagement.”

The one continued hearing scheduled for the evening regarding the open space mixed use development (OSMUD) proposed at last month’s meeting for 83 East Main Street had to be continued until Sept. 19. Only four voting members were present when the hearing was called. While an actual quorum of five members was present, member Jane Moran had recused herself from voting on the project.

The plans called for the replication of a historic single-family home on the site as well as the construction of three age-restricted units. The site, part of the Village Center zoning subdistrict, is a small triangular plot at the corner of East Main Street and Legacy Farms Roads North, just west of Weston Nurseries.

Developer Roy MacDowell agreed to the delay, saying there couldn’t be “meaningful discussion” without a voting quorum in attendance.

The board voted unanimously to reappoint Larson-Marlowe as the Planning Board’s ZAC representative as well as to reappoint Madhumitha Chandrasekar and Nisha Nanaware to two-year at-large terms on ZAC. Design Review Board members Jeff Doherty, Jeannette Thomson, Sue-Ellen Stoddard and Tiana Mui were reappointed to their seats for one-year terms. Planning Board member Fran DeYoung was appointed to serve as the board’s designee to the Trail Coordination and Management Committee (TCMC).