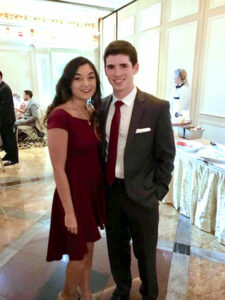 Hopkinton native Kevin Windheuser hopes to stir up enthusiasm for a cleaner environment, one metal straw at a time. 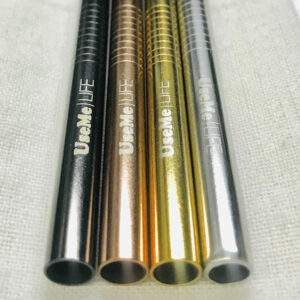 UseMe LIFE’s metal straws are designed to be an eco-friendly alternative to plastic straws.

Windheuser and his girlfriend, Julia Piri, have created a business, UseMe LIFE, that sells metal straws to individuals and organizations. The straws can be used in place of plastic or paper versions.

The business was inspired by a trip that couple took to Ireland, where they were impressed by the cleanliness of the beaches and the surroundings in general.

“We wanted to bring a little bit of that back,” said Windheuser, a 2012 graduate of Hopkinton High School who now lives in Boston. “We knew we wanted to do something and thought this was something we could do to make a difference.”

They decided on a business that would offer metal straws as a replacement for environmentally harmful plastic ones.

Americans use an estimated 500 million straws a day, according to the Association of Zoos and Aquariums.

These small straws can do big damage to the environment.

As many as 70 percent of seabirds and 30 percent of turtles have ingested some form of plastic from the ocean, the Association of Zoos and Aquariums estimates.

Plastic straws are one of the most common forms of single-use plastic. Many types of straws cannot be reused or recycled due to the chemicals from which they are made. Most plastic straws are not biodegradable and cannot decompose into non-toxic materials.

And because straws are small, pieces can be ingested by fish and could end up on someone’s dinner table, Windheuser noted.

As a result, some companies are phasing out the use of plastic straws. Firms as large as Starbucks and Disney have announced plans to ban them at their locations.

“Giant companies are going away from plastic straws,” he said. “They have to have a replacement. This is our option for a replacement.”

Metal straws are sturdier than paper straws, which have become a replacement for the plastic variety in some settings. Paper straws can become soggy, Windheuser noted, and challenging to use.

Windheuser, who majored in mechanical engineering at the University of Hartford and now works as an engineer at Boston Scientific in Marlboro, considered a few manufacturers before settling on one in China.

He is taking steps to encourage people to take metal straws seriously by adding a personal touch.

He offers customized straws to individuals and to companies and organizations that offer them as giveaways at conferences and other such events. These straws bear the name of the person using it or the organization distributing them.

Having their name attached to the products adds to its appeal, he explained, noting: “People want to use them.”

Windheuser said these have proven to be very popular, as companies know that eco-friendly items appeal to their customers, particularly younger generations. “It’s an easy sell,” he said.

He also hopes to convince restaurants to use metal straws with the eatery’s name on them, and they would then wash them as they would silverware.

The straws come with a wooden box where they can be stored safely and cleanly.

For individuals looking to purchase straws for their own use, a set of four in different colors, which includes a carrying case and cleaning brush, retails for $18.99.

In time, the business could expand into other eco-friendly offerings, possibly recycling bags that can replace plastic or paper ones. “That’s where the future of the company is going,” he said.

Being green matters, of course, but encouraging others to go green is the ultimate reward, Windheuser said.

The goal, he said, is “getting [metal] straws in people’s hands.”

Straws are not large items, but that doesn’t minimize the effect they can have on the world.