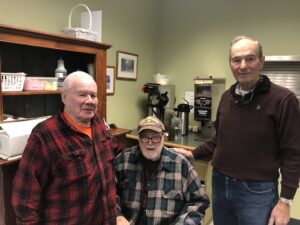 Hopkinton has a proud military history, and some individuals in town want to make sure it’s not forgotten.

Spurred by an idea from longtime veterans advocate Hank Allessio, a group has started a Military History Essay Contest for high school seniors from Hopkinton.

With sponsorship from Phipps Insurance Agency and UniBank, and support from the Association of the United States Army, the contest will award scholarships of $1,000 for the winner, $500 for second place and $300 for third place.

“The level of veterans interest and activities in Hopkinton compared to my knowledge of similar towns in Eastern Massachusetts is very strong,” said Allessio, a Vietnam War veteran. “It was a matter of staring at the ceiling and saying, ‘What can we do with this?’ The thought occurred that one of the unfortunate things in town is we think American history, particularly American military history, is not taught [thoroughly] in the schools. … So we want to get them to write essays on some key military subjects. We could put together some very believable and accurate stories.”

Among those evaluating the essays are Joseph DePinto, CEO of 7-Eleven and a civilian aide to the secretary of defense, and state Rep. Carolyn Dykema, along with Allessio and fellow Hopkinton veterans Pat Lynch and Dick Brault.

Local attorney Ted Hoyt, a West Point alumnus and retired Green Beret, is one of the contest’s organizers.

“These World War II guys aren’t getting any younger, Korean War as well. The idea is to see if we can get some of the kids to go out and talk to them,” Hoyt said. “I think part of it is a lot of the veterans think that military history isn’t covered very well, if at all, in the schools. They feel it’s very important, and they want to drum up a little interest, get these kids thinking.

“A lot of these people right here amongst them, their grandparents and even some parents, have made some sacrifices,” Hoyt added. “It’s something that they should be proud of.”

Essays are due by Feb. 1, and winners will be announced on Memorial Day. For more information, email hopmilhistory@gmail.com.

Hopkinton lost a longtime town employee when Michael Fredette passed away unexpectedly on Dec. 30 at the age of 54.

Fredette graduated from Hopkinton High School in 1983 and worked for the Water Department for 33 years.

Select Board chair Brendan Tedstone reminisced about Fredette at the Jan. 7 Select Board meeting.

Added Tedstone: “The town’s heart goes out to the remaining Fredette family. He was a great guy, and we will miss him for a long, long time.”

“It was a tragic loss, an awful thing to have happened,” Westerling said. “Our hearts go out to the family. It’s a very difficult time for the DPW. We appreciate the support, and we’ll find a way to make it forward.”

After 15 years helping and then running an annual Thanksgiving turkey drive in town, Hopkinton High School senior Dylan Johnson is passing the torch as he prepares to head off to college. The project, started in 1998 by Dan Merzel, consists of students soliciting donations of food and money to help feed local families.

With support from the Hopkinton Country Club Charitable Foundation, along with classmates including Keelan Boyle, Ally Bird and Seth Jenkins, Johnson and friends raised enough to provide assistance to more than 120 people this past Thanksgiving.

HHS sophomore Charlotte Cann helped organize this past year’s event and will take the leadership role for next fall.

“The Turkey Drive has been a major part of my Thanksgiving celebration for the past 15 years, we have helped so many families in MetroWest!” Johnson stated via email. “I am happy to report that this great Hopkinton tradition is in very capable hands with Charlotte stepping up.”