Attendance up dramatically during first year of new building 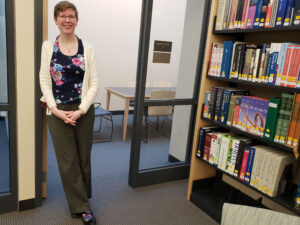 Library director Heather Backman poses next to one of the study rooms in the lower level of the Hopkinton Public Library. PHOTO/MICHELLE MURDOCK

After the Hopkinton Public Library’s first full year open in its new building, foot traffic increased 47.7 percent, which equals more than one person every two minutes while the library is open. And that’s only one of the impressive statistics covering the November 2017 to October 2018 timeframe.

According to numbers provided by library director Heather Backman, total circulations, which include both physical and electronic resources, were up 25.6 percent, and 1,577 new cardholders were added.

But more importantly, as Backman reported to the Board of Selectmen in early December, the library is transforming Hopkinton.

“It has been an extraordinary year for us,” Backman said. “We are truly a community center.”

“The library is enriching residents’ lives by providing a space that is open and welcoming to every person where people can rub shoulders with people who hail from all walks of life and all parts of the community,” Backman said.

Also contributing to the transformation are the library’s community meeting rooms, which Backman said serve as a launch pad for local groups seeking to contribute to the community. Open free of charge to non-profit organizations for meetings or program offerings, the community meeting rooms enable the library to build a more connected community by enabling residents of all ages to share their passions with friends and neighbors.

“The library is also a platform for individuals,” Backman said. “Many of the 330 events that we sponsored in the last year in the new building were instigated and run by Hopkinton residents.

During the past year the library also answered 2,415 reference questions, had 1,868 uses of the new study rooms, and had 977 tutors and students use space in the reference area.

“In short, the library is transforming lives and it’s transforming our community,” Backman said. And while she said it is hard to put on number on that, she did try, presenting the board with an estimate.

“Based on the level of use and services provided in our first year in the new building, I’ve estimated that the library provided over $3 million in value to the community,” Backman said. “With an FY19 appropriation of $548,303, the result is a return of investment of approximately $5.50 for every dollar the town spends on the library.”

Looking forward to the upcoming year, Backman says there is no resting on laurels, and the library will seek to do even more for the community. With funding already received, the library was able to open on Saturdays during the summer, and in early 2019 the library will add evening hours, staying open Monday through Thursday until 9 p.m. Shortly after that, Backman said Sunday afternoons will be added to the schedule.

Next steps for 2019 also include updating the library’s strategic plan with information obtained from a survey and focus groups. Backman said she hoped to be back before the board in the next few months to share the outcome of that process.