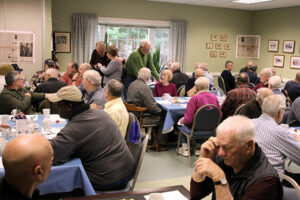 There’s always a good turnout for the monthly Veterans Breakfast, like this one held earlier this year at the Senior Center.

For Ron Remillard, the Veterans Breakfast has been a monthly tradition the past six years.

On the first Friday of each month Hopkinton veterans meet for breakfast at the Senior Center, which has been hosting the event since not long after the creation of the building in 2006.

Though the Veterans Breakfast serves in providing a free meal, it also helps veterans of the town connect and catch up with one another.

Remillard and Ron Clark, both Army veterans who served in Vietnam, cracked jokes with one another and talked baseball over their hot meal on Sept. 6.

Henry Allessio originally introduced the pair to the breakfast. Allesio has served as a host for the event since 2006, when Sally Almy, at that time the assistant director at the Senior Center, asked Allessio to help.

“I knew Henry for a long time before he told me about the Veterans Breakfast,” Remillard said. “He’s done a lot work reaching out to people letting them know about the breakfast.”

Allessio has a long history in giving his time for veterans. He began a project where his goal was to get a photograph of every veteran in Hopkinton. He has around 600 photographs, and he’s always accepting more. He also began a video documentary series, partnering with HCAM to record veterans talking about their experience in the military.

“I don’t think we do enough to honor our veterans, and I want to make sure the younger generation is aware of their sacrifice,” Allessio said.

Toward the end of every breakfast, Allessio takes time to introduce any newcomers to the group. He goes through “sick call,” where updates are given about any members who are sick or not in attendance. At the September breakfast, a moment of silence was held for Luis Deleon-Figueroa, an Army Green Beret from Chicopee who was killed in action last month in Afghanistan. 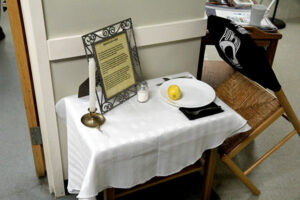 At each Veterans Breakfast an empty table is set aside to acknowledge military personnel who are missing or imprisoned.

A small, empty table sits next to the entrance of the door. Known as the “Missing Man Table,” it’s a memorial set up during dining functions in the military to commemorate those missing in action or imprisoned.

Almy, who still volunteers, began the tradition when the Senior Center was located in the Town Hall basement, hosting a small breakfast for a small number of veterans.

“We didn’t have much room, there were only six or eight people who went, and it was only me doing the cooking,” Almy recalled.

Now there are multiple cooks creating the meal and a group of volunteers to help set the tables and serve the food to 30-50 veterans each month.

Though the cost of the items served comes to about $4 per person, a tradition was started by a volunteer named Joe Martin, who has since passed away. He made a donation, and the veterans have not had to pay since then. Now there is a waiting list to donate for the breakfast, stretching into the early months of 2020.