Frustrated abutters plead to Select Board 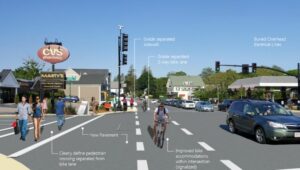 Proposed changes to the downtown area include altering the road to better accommodate vehicles and bicycles.

Frustrated residents and business owners got their chance to state their case against the Downtown Corridor Project at the Select Board’s Sept. 24 meeting, but the board made it clear the project will not be abandoned.

“This you may not want to hear: We’ve been talking about this work for 20 years, if not 30 years, “ Select Board member Brian Herr said. “And it starts with that intersection getting changed — the Main Street intersection. And it goes up to Wood and West Main, and it goes out to the Common. So this has been going on forever.

Herr has been a target of a few abutters, who took issue with a comment he made at a previous meeting asking for evidence that actual “harm” was being done to land-owners. Herr had been referring specifically to temporary easements when he made the remark, but abutters apparently interpreted the comment as a reference to the overall project.

“For my family, the emotional and financial cost of living in a construction zone and operating a business during the estimated several-year-long construction period is immeasurable,” said Sandra Ward of 67 Main St. “When running a small business, you expect a certain amount of adversity in the sense of competition or a recession. But you should not have to worry about your own town preventing you from conducting business for a beautification project.

“Imagine if you’ve operated a business for decades only to have such a project threaten to destroy that business by restricting customer access, eliminating on-street parking and placing an easement over your entire private parking area. You say that no one has pointed out the harm yet. We have. The town just has not listened.”

Herr acknowledged that losing parking would be a proven harm and said the board should address it. Select Board chair Brendan Tedstone concurred.

“When a construction project eliminates the ability for customers to get into that small business, or large business, I absolutely agree that it’s a harm and that there should be probably some compensation for it,” Tedstone said. 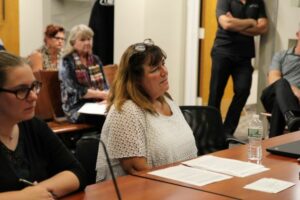 Marianne Auger expressed her concerns about the Downtown Corridor Project before the Select Board.

Marianne Auger lives at the intersection where Wood Street forks off of Main Street, across from Next Generation Children’s Center. She said the town has indicated plans to take 15 feet of her yard in order to facilitate a new left-turn lane, bringing traffic that much closer to her home and making it that much more difficult for her to eventually try to sell her home.

“My biggest concern so far with this project has been a complete lack of transparency,” Auger said. “I was informed in April through a certified letter that my property would be affected by the project. It was the first time that I had been contacted or made aware of my involvement. It also included a certificate of donation in case I wanted to donate my property rights to the town.

“In a recent rebuttal letter stating the concerns of the people affected by the project — namely the 90-plus abutters — the board repeatedly answered the concerns and questions of the abutters with, ‘The project was approved at Town Meeting and therefore represents the collective wisdom and will of the town voters.’ I ask you how this can be true when most of us were only informed five months ago of the impact to our property?”

Town engineer/facilities coordinator Dave Daltorio noted that much of the property slated to be taken in front of Auger’s house actually is part of the town’s right of way, meaning it is town property that Auger has been allowed to use.

Herr said he did not agree with the idea that people should be encouraged to donate their property rights to the town, saying they should always be compensated. However, he dismissed complaints about a lack of transparency.

“I don’t know how much more transparent we can be about a project that’s been going on for 20 years,” he said. “So for those that are going to argue lack of transparency, with all due respect, it’s not going to go very far.” 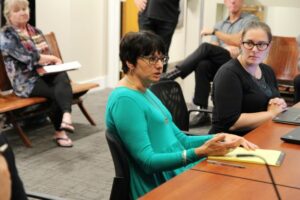 Jacqueline Fick Cleere expressed her concerns about the Downtown Corridor Project before the Select Board.

Jacqueline Fick Cleere has lived at 84 Main Street for 19 years. She said she is being asked to give easements, temporary or permanent, on approximately 1,000 square feet.

“When we got this initial request for donation we thought, ‘OK, it’s a thousand feet, it’s for the good of the community.’ But subsequent to that, questions have been unanswered,” she said. “And rather, they’re just continuing to grow.”

She added: “I’ve been naive. But at this point in time I’m taking off the rose-colored, life-is-peachy glasses, and I want some answers.”

Concerns also were expressed about the cost of the project — with a $1 million increase over the original estimate already put forth — and the length of time construction would take place. The town has asked some abutters for five-year easements, leading some to believe construction would go on the entire time. However, Town Manager Norman Khumalo explained that the first year is for the design, and the final two years are for protection against any issues that might arise, leaving two years for the actual construction.

“We’ve been apprised that this will cover two construction seasons,” Khumalo stated. “I think the question has been asked before, and the explanation is simple: We accounted for one year for the design phase. We accounted for an additional two years for the construction. And then the remaining period is the warranty period. If there’s work that needs to be done to fix anything that doesn’t grow, or grading that doesn’t hold, we want the town to be able to come back and do that.”

It also was noted that construction season generally runs from April through November, depending on weather conditions.

In an interview a few days before the Select Board meeting, Khumalo and representatives from the engineering firm VHB acknowledged changes have been made to the project, which has led to some confusion among the abutters. VHB representative Matt Chase said alterations are typical in a project of this scope, and some of the changes were made in an attempt to minimize disruptions to those who came forward with concerns. Yet clearly there are people who still have concerns.

“The only way I think they’d be happy is if there’s no impact whatsoever,” Chase said.

Herr tried to appease the abutters by insisting he wants to help those who have proven harm is being done to their property or business, suggesting that he would support additional financial support beyond what is required by law.

“I know everyone’s mad at me for bringing it up,” he said. “The reason I brought it up is to get you out here to tell me what the issues are so we can solve them for you. There’s a method to my madness, believe me.”