Project Just Because announced Thursday that it has started a fundraising campaign to purchase its own building. The Hopkinton nonprofit currently leases a facility on South Street. It plans to buy a building on the same street and move in by July of 2022. The goal is to raise $2.5 million.

Organizers announced that the second annual Hopkinton High School graduation car parade will be held Saturday, June 5. The parade will start at 10 a.m. at the high school and, like last year, will pass all of the schools in town.

The annual Relay for Life, a fundraiser for the American Cancer Society, returns this year, but it will look a lot different. There will be no overnight gathering at the Hopkinton High School track. Instead, there is a series of events on Saturday to raise awareness and donations in the battle against cancer.

The Tri-Valley League recently handed out awards for the Fall 2 season, and a number of Hopkinton High School athletes were recognized. Leading the way were football standout Cole Salyards, who was named co-Offensive Player of the Year, and Tess Weatherhead, who was named Diver of the Year.

Photo of the Day: Hopkinton High School baseball player Cam Jerrett takes a cut during a game earlier this week. 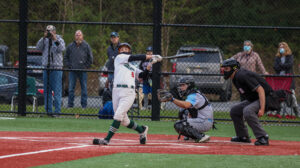