Devon Gibney personifies two aspects that make the April 18 Boston Marathon a very special race. The Hopkinton native is running for the Hopkinton Women’s Club as the race marks the 50th anniversary of the first official field of women runners — eight athletes who competed in 1972.

The Boston Athletic Association announced Wednesday that Russians and Belarussians who currently reside in either country and signed up for the Boston Marathon as part of the open registration process will not be allowed to participate in this year’s race.

This week’s edition of the Police Log includes reports of teenagers riding bicycles on West Main Street at midnight, a turkey that wouldn’t leave a porch, and a paintball being fired at a vehicle.

The Knights of Columbus is hosting a fundraising event for adults (18 and up) called A Nite at the Races on May 7 at 7 p.m. at St. John’s Parish Hall. There will be 10 horse races and 10 grand prize gift drawings.

Photo of the Day: Professional restorer Mark Baxter provides the Doughboy statue with its annual polishing in preparation for the April 18 Boston Marathon. 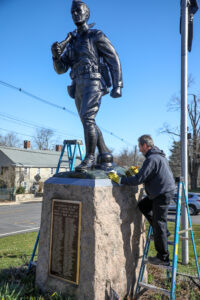