At its meeting last Wednesday, the Planning Board unanimously approved an open space and landscape preservation development special permit for a proposed nine-lot development on Hayden Rowe Street just north of the intersection with College Street. During the discussion, it was suggested that the Historic Commission look at the two billboards on the site to determine if they could be considered historic structures. 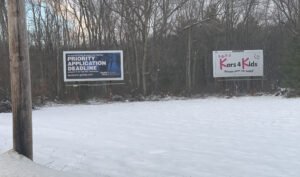 Should these billboards on Hayden Rowe Street be considered historic and preserved? Cast your vote below. PHOTO/JERRY SPAR

Superintendent Carol Cavanaugh, in an email to the schools community, stated that there are no plans to switch to a fully remote model the first week after winter break. The schools went fully remote the week after Thanksgiving, prompting some to speculate that a similar strategy might be used again to prevent a spread of COVID-19, especially with people traveling or welcoming family and friends into their homes during the recess.

Schedule note: Hopkinton Today will be taking off the remainder of the week. While HopkintonIndependent.com will continue to post news as it happens, the daily updates will return on Monday.

Photo of the Day: Snow sits on stored boats at Hopkinton State Park. 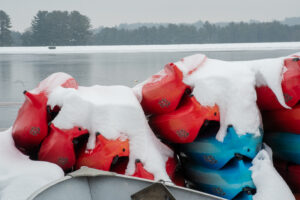