A three-alarm fire broke out at 10 Mayhew Street early Tuesday afternoon. Heavy smoke could be seen in the downtown area around 12:30 p.m. and was under control an hour later. No injuries were reported, although six residents of the home were displaced.

Leading off the Select Board roundup, the board paid tribute to longtime Hopkinton High School teacher and coach Aubrey Doyle, who died Feb. 21 at the age of 90. The board also approved the hiring of police officer Matthew LaTour.

The Hopkinton High School boys basketball team’s impressive season came to a close Tuesday night with a 58-44 loss at Wellesley in a Division 1 state tournament preliminary round game.

Photo of the Day: A firefighter stands among the charred remains after helping to extinguish the fire at 10 Mayhew Street. 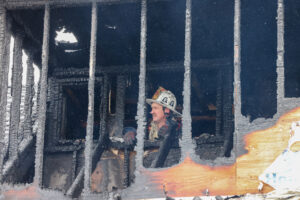