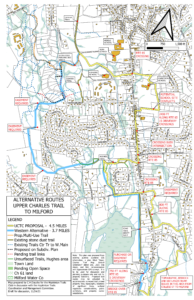 The Trails Club alternative is in blue on the accompanying map, while the UCTC option is in yellow.

The Hopkinton Trails Club has expressed concern about the plan, especially with the fact that it includes three crossings of Hayden Rowe Street (Route 85) along with an approximate half-mile section along Hayden Rowe Street.

The Trails Club, which is a private Hopkinton group, has proposed an alternative route that it considers safer, as it avoids any crossings of Hayden Rowe Street. The “Western Alternative” extends from the existing Center Trail around the western and southern sides of the Charlesview neighborhood to connect with the Hughes Farm Trail. It then would extend south across Granite Street to the existing Echo Trail and south to Route 85. The Trail would run south along Route 85 for a short distance before going up and over Route 85 on a future ramp and bridge to a ledge on the east side.

The Trails Club notes that having the trail go around Charlesview would require land purchases or easements, as it would pass through land owned by three private land owners. Additionally, the land is a mix of wetlands and hills, features that would need to be addressed.

The Trails Club also recommends stone dust (similar to the Center Trail) for the new trail’s surface, while the UCTC recommends asphalt.