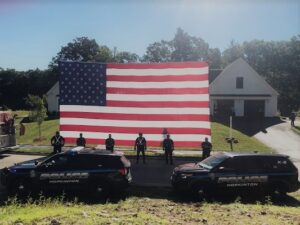 Greg Galeazzi, who lost both of his legs while serving as an Army captain in Afghanistan, moved into his custom-built home in Hopkinton on Thursday, welcomed by the Hopkinton Police and Fire Departments.

Galeazzi’s house on Stoney Brook Road was gifted by the Gary Sinise Foundation, an organization that builds “specially adapted smart homes for our most severely wounded heroes.”

“I’m feeling very humbled and grateful for everything that the Gary Sinise Foundation and so many donors and just individual Americans have contributed,” Galeazzi said in an interview with Boston television station WCVB shortly after moving in. “I don’t know if words can really do justice — building this house, and to see it today completed, it’s incredible.”

Galeazzi was leading his platoon on a foot patrol in Afghanistan’s Kandahar Province on May 26, 2011, two weeks from ending his deployment, when he was struck by an improvised explosive device. He lost both of his legs and his right arm.

“We went out on some normal daily patrol, we met with some local leaders to get a feel for what’s going on and any ways we could help,” he told ABC News in 2017. “We were on our way back from that mission. Walking down the road, out of nowhere, I was just hit by a roadside bomb. My legs were gone, my arm was almost completely severed at the elbow as well. Without a medic there to have morphine, there’s no sort of pain medication. So the only thing I could do was scream. My soldiers put me on a helicopter and I blacked out. By the time I was brought to the trauma bay they had revived me.

“What I found out then was that the real nightmare really was just beginning. Even with the most loving, supporting family, friends and community behind me, I was the one that was there in the middle of the night staring at the clock in pain, in tears, wondering when or if it will ever get better. 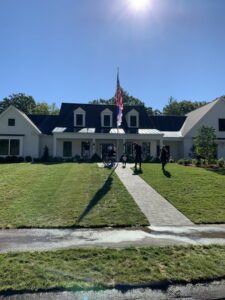 Prior to leaving for Afghanistan, Galeazzi, who received a B.A. in marketing from Loyola University in Maryland, had decided to change his career focus to medicine. As he recovered from his injuries, he did not waver from that decision.

“All these experiences, with having over 50 surgeries, hundreds of hours of physical therapy, months on end as an inpatient in the hospital, not only did I still want to practice medicine but it strengthened my resolve to do it,” he told ABC. “I started taking night classes again.”

After studying pre-medicine at the University of Maryland, Galeazzi was accepted to Harvard Medical School in 2017.

Galeazzi, his wife, Jazmine (they met in medical school), and their 1-year-old son, Teddy, had been living in an apartment in Boston before their move to Hopkinton. Jazmine is pregnant with the couple’s second child.

“Even though I’ve gone through this journey, it’s not lost on me how unbelievable this ride has been and how lucky I am to be here,” Galeazzi told ABC. “Be patient with difficult times, and even when things may be getting worse for a little while, just be patient and stick it out, because with time things do get better.”