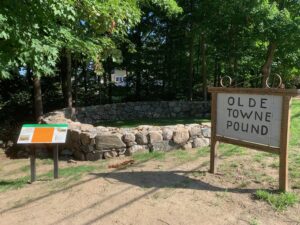 The pound, located on Main Street just west of the fork with Wood Street, got improvements to the stone wall and landscaping along with a new sign detailing the land’s history.

Residents Jane Moran, Art Brooks and Jeff Barnes and the local landscaping company New View donated their time to fix it up.

“It’s a really interesting piece of history that is pertinent to New England particularly, so we felt it was important to preserve that,” Moran said. “There’s only a few left in New England. It’s a little jewel for town folks to enjoy, to allow them to grasp a bit of our history.”

According to Moran’s research, in the early 1700s there were two pounds in town to house livestock, including one on the Town Common. In 1850 a pound of 2,000 square feet was located on town-owned land that abutted the rear of 19 Wood St., where it remains today.

After it ceased being used the ground became overgrown, but in the mid-1990s a local Boy Scout led a project to clean it up. Now it has received another restoration.

There are no parking spots on site, but Moran suggested pulling up on the curb, or parking at the entrance to the Center Trail, which is just up the road.