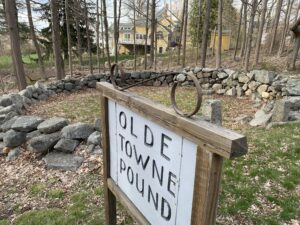 If you’ve ever driven by the Olde Towne Pound sign and structure on West Main Street (just west of the intersection with Wood Street) and wondered what it was, you’re going to get your answer.

Resident (and Planning Board member) Jane Moran recently was granted permission by the Select Board to lead a restoration project for the pound.

Local landscape designer New View offered to do the bulk of the work restoring the circular wall, which used to be higher. That work is scheduled to take place in early June, Moran said. Residents Art Brooks and Jeff Barnes also have volunteered to help with the project and already have contributed to the property’s upkeep. Brooks is working on fabricating an iron gate that would be similar to the original one that no longer exists.

Moran was granted $1,250 for signs that will tell the history of the pound, which she said was one of a few in town that were built many years ago to contain livestock that residents left in the center of town to graze.

“The history is really quite interesting and actually kind of entertaining,” Moran told the Select Board on April 7. “The term ‘pound’ comes from back in the 1600s when the state was still under a lot of the British influence. That was their town measurement.

“Back in the day [starting in the early 1700s] there were actually two town pounds, on the Town Common, and the citizens were allowed to let their cattle and their horses and their sheep and their goats graze there. Then at night, if the owners hadn’t picked them up, volunteers would collect them and put them in these secure structures.

“The structures were designed to be high enough so a horse couldn’t jump out of it, deep enough so the structure itself, the stones had to be dug down about 3 feet so that the pigs couldn’t burrow under it, and it had to be strong enough so that a bull couldn’t break through it.

“Then in the morning when the owners wanted to come and collect their animals they had to pay a fee, whether it was a shilling or a pound, depending on how big or what the care was.

“The state mandated that each town have these town pounds, but it was up to the town to determine the size and the structure.”

Moran’s research shows that in 1850 a pound of 2,000 square feet was located on town-owned land that abutted the rear of 19 Wood St. — between Wood Street and West Main Street. That remains the location today, with the frontage on West Main Street.

In 1994 the pound was not visible due to overgrowth, but a local teenager, Paul Healey, made it his Eagle Scout project and cleared the land to expose the historic structure. In 1997 Brooks, then a Boy Scout leader, carved the Olde Towne Pound sign that still stands today, using material donated by Garner Brothers Saw Mill. A wooden cow, carved and painted by Harvey Proctor, was placed in the pound to add context (it’s no longer there).
Another interesting feature about this pound is that it’s circular, whereas most were square, Moran said.

“Hopkinton has one of the only ones left,” she added.

In early April, eighth-grader Disha Mudenur started painting rocks with inspirational sayings — some from the internet and some of her own — and placing the stones around her West Elm Street neighborhood.

Inspired by the Kindness Rocks Project, which she learned about at Hopkinton Middle School last fall, Mudenur started her own version, called Community Hope Rocks. 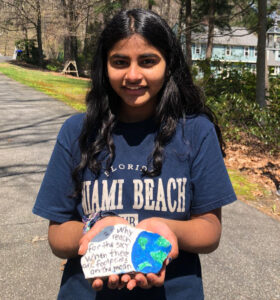 Disha Mudenur shows one of the rocks she painted with an inspirational slogan.

She started by painting rocks and placing them along the street when she walked her dog.

She wasn’t necessarily trying to be anonymous, but she did not call attention to what she was doing. Eventually, however, word got out.

“One time a lady was taking pictures of them and I had just finished putting one down,” Mudenur recalled. “She said, ‘Oh, these rocks are so cool.’ I thought she knew it was me, so I said. ‘Thank you.’ She said, ‘Oh, they’re yours.’ So that’s when I guess people started noticing.”

Her initial goal was to paint 100 rocks, and she passed that some time ago. Usually she works on small rocks, because the bigger rocks are harder to paint and require help from her father, Basu Sugeerappa, to move.

Mudenur shared her project with friends and encouraged them to submit photos, which she shows on her website (sites.google.com/view/hoprocks). She is inviting anyone to join.

“Others are picking up on it and starting to do it, spreading the hope message,” she said.

Cheryl Perreault, who recently ended a 14-year run as host of “Wake Up and Smell the Poetry” on HCAM, is putting out a call for poetry and true stories for a book/media project “that offers words of hope for challenging times such as the current time of pandemic we now are facing.”

The title of the collection, which Perreault is coordinating along with Cynthia Franca, is “Hopkinton and Beyond — Words of Hope that Connect Us in Challenging Times.”

Each individual can submit up to three poems or one true story (maximum 500 words) from a life experience or observation that offers hope.

Some selected submissions might also be shared on HCAM and on the website hopkintonthroughpoetrybook.com, where more information is available.

Submissions can be emailed to hopkintongenerationbook@gmail.com.

← Letter to the Editor: Care for community Photo contest winner, May 20 edition →