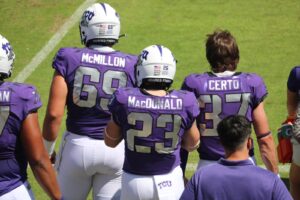 Christian MacDonald (23) is relishing the opportunity to be a part of the TCU football program.

When Christian MacDonald stood in the tunnel, just moments before kickoff, what he had accomplished really started to hit him.

The Hopkinton High School graduate, a sophomore at Texas Christian University, made the football team as a walk-on this fall and was about to take the field at Amon G. Carter Stadium. Due to the pandemic, the open-air stadium was only filled to about one-fifth of its normal capacity. But, at 10,000 people, that’s still a much bigger crowd than the average Tri-Valley League game.

“It was one of the craziest experiences of my life,” MacDonald said. “Dressing was normal. I was with the same group of guys. But as soon as we were in that tunnel and started running out, it was the most surreal feeling.”

He added, “I felt like I was living a dream.”

The 2019 HHS graduate worked hard to get to this point. After being drawn to TCU by a family friend who attended the Fort Worth, Texas, school, MacDonald started exploring the walk-on process last year and decided to give it a shot.

During spring tryouts, he participated in a variety of workouts. While juggling his courses, he woke up at 6 a.m. for intense running workouts. Some hopefuls either could not keep up or chose to throw in the towel, but MacDonald kept pushing.

As the season approached, the workouts became more football-focused and, one-by-one, other would-be walk-ons were told their services were no longer needed.

“I was really worried,” MacDonald said. “In the back of my mind I was thinking, part of me is not going to be too mad because this was a crazy opportunity and I shouldn’t even be here in the first place.”

But one day MacDonald and the rest of the walk-ons received a text: “You’re being added to the roster.”

MacDonald is number 23 and listed as a 6-foot-1, 198-pound wide receiver, but he works with the Horned Frogs scout team. His job is to serve as the opposition in practice to help the starters and the other scholarship players prepare for the coming week’s game.

“I have met a lot of awesome guys,” he said. “It’s crazy knowing that some of these guys may be playing in the NFL someday.

MacDonald’s days, he said, mostly consist of waking up, attending online classes, then going to practice.

The football team attends classes online even though students are on campus in an effort to better insulate them from any COVID-19 spread. The team studies together in a facility upstairs in the football stadium in the morning. Football meetings start at 2:20 p.m., followed by practice. MacDonald is back to his room by 7 p.m. to do his homework before bed.

“It’s a huge commitment, but I have so much fun,” he said. “There are guys who are interested in doing this and I tell them, ‘You have to love the game, because it will literally take over your life.’ ”

Last year, MacDonald had more time to spend in the library, or hanging out with his friends or his Sigma Nu fraternity brothers. This year, he does not have nearly as much free time, so he’s learning to use the time he has as efficiently and wisely as possible.

And it’s unclear whether the effort will result in any playing time. Due to smaller travel parties, MacDonald said the scout team players are not going to be going on the road with the team this year. TCU opened the season with a 1-2 record, with the win a 33-31 upset at ninth-ranked Texas.

“Obviously trying to get into a game is a long shot in the Big 12,” MacDonald said. “But my dad says, ‘You can’t get in unless you stick with it.’ I will keep trying and, even if I don’t get in, I will be happy that I went through the process.”