Hopkinton’s Student adjusts to life as a Hokie 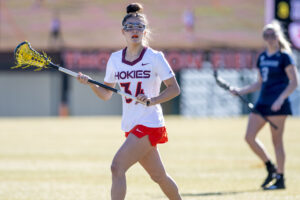 When she looks around the mountains of western Virginia, Sophie Student knows she is a long way from her Hopkinton home in a variety of ways. But the Virginia Tech student has been able to make a strong first impression at the Blacksburg, Virginia, school, particularly on the lacrosse field.

“I think a huge thing for me was that I needed to do something different, meet new people, explore a different area and get out of my comfort zone,” Student said. “I love the big sports feel Virginia Tech has, and when I visited the campus, I just loved it.”

Student arrived at VT last fall after a stellar high school career at St. Mark’s School in Southborough. She was MVP of the Independent School League, a three-time All-ISL pick, and a US Lacrosse All-American.

Of course, heading to school during the COVID-19 pandemic has meant the “big sports feel” of the ACC school has been somewhat blunted. But it hasn’t dampened Student’s enthusiasm for her college choice. Studying and playing during the health crisis, Student said she has always felt supported.

“From a school perspective, it wasn’t too hard to transition, which I was thankful for,” she said. “It was hard at times athletically because we had to go to practice and then try not to interact with anyone else. But we did our best as a team to just focus on athletics and try to push off our social wants until after the pandemic.”

In some ways, Student said the pandemic eased the transition a bit, saying she felt she was being pulled in fewer directions with many of the typical trappings of college unavailable.

“I could get my feet under me and focus on my schoolwork and sports,” she said. “Because there was nothing else to do with my free time.”

Student wasted no time making an impact with the Division 1 program. She played in 14 games for the Hokies this spring, including a start. She scored twice and added three assists, along with 21 draw controls.

“I didn’t assume I would get playing time right away, but I was hoping for it,” Student said. “I went in with my eyes wide open because you never know. I just wanted to work super hard and get on the field, and I want to play a bigger role going forward.”

She is also hoping for more team success in the years to come. COVID-19 impacted the Hokies this spring and Student admitted to some “ups and downs” through the course of the season, but added that the program has a number of talented players returning and coming in.

“I hope we can continue to grow and do well in the ACC,” Student said. “The ACC is such a competitive conference, that’s one of the reasons I wanted to play in it. I hope moving forward we can compete at that level and win our ACC games, it’s a huge goal for me as well as our team.”

And Student knows she will be pursuing those goals with her parents, Laurie and Bernie, and her brother, Ethan, in her corner.

“They are so happy for me,” Student said. “They definitely miss seeing me all the time but they were able to go to a bunch of games and watch on the ACC Network. They think it’s awesome I am at a big school with big time sports.”