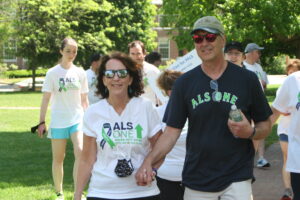 Becky Mourey and husband Jim lead walkers out from the Town Common as part of the 4K 4ALS on May 23. PHOTO/JERRY SPAR

One year ago, Becky Mourey was enjoying an active life in Hopkinton. Two of her passions are running and playing the clarinet, and she was able to maintain those despite the COVID-19 pandemic.

She first noticed a problem when she headed out for a run in the woods with her husband, Jim, and she could not push down the nozzle on a bottle of bug spray.

“I had a strong feeling of weakness in my fingers that went along with that,” she recalled. “I didn’t think too much about it, I thought maybe it was overuse from playing my instrument. Then I was noticing that I couldn’t open up my hair clips and was having trouble with the curling iron, little things like that. Then I was getting deep aches in my neck and low back, behind my ribcage. But I still wasn’t very alarmed.

“Then one day in August, I was sitting on my back deck, I looked down and I could see my right arm wiggling, twitching away. I couldn’t feel it, but I saw it. And I looked down at my left arm and saw it.”

After visiting her physician, Mourey underwent a series of tests.

“Everything came back normal until I had an EMG [electromyography], which tests your muscles and your nerves,” she explained. “From that they could tell it was affecting my upper and lower motor neurons, which are your nerve cells that are responsible for sending messages to your muscles — muscle movement. They could tell from that that it was concerning for ALS.”

“One of the problems with ALS is it’s really hard to diagnose,” she said. “There are really no clear biomarkers yet. They’re working on that. So it’s really testing anything else that could affect your motor neurons and ruling them out. I was hoping I had other things that were manageable.”

Mourey continues to teach music, but she has not been able to play her clarinet for more than six months. Running also is in the past, although she still walks, either outside or on the treadmill. Aside from occasional painful muscle cramps, she is mostly pain-free.

“My legs are much stronger than my arms,” she said. “They’re getting weaker and it affects my gait somewhat. Sometimes I feel like a toddler learning to walk. It makes my gait really awkward. And I’m definitely slower. I was a runner. I was running before this happened. But I can walk, I can get up and down stairs, and I’m very thankful I can still do all that.”

Mourey’s new passion, which she’s taken on with help from her husband, son Tyler, daughter Ali and friends, is spreading awareness about ALS and raising money to fund research toward treatment and a cure.

She joined an advocacy group called I Am ALS. She is participating in a clinical trial at MGH. And on May 23 she partnered with the nonprofit ALS One (alsone.org) to host a 4K 4ALS, a walkathon at the Town Common.

The event was a lead-up to June 2, when Major League Baseball will celebrate the inaugural Lou Gehrig Day to promote ALS awareness.

“One of the things I’m working to change is education,” Mourey said. “I had such a huge learning curve. I want people who are newly diagnosed to not have to overcome that by themselves. So I’m involved with groups that are figuring out ways to do that.”

She also scheduled a meeting with Rep. Jake Auchincloss to solicit his help in pushing for the Food and Drug Administration (FDA) to more quickly approve drugs that are being used in other countries but that are not yet OK’d for use in America.

“Right now ALS is 100 percent terminal,” she said, noting there is a life expectancy of 2-5 years after onset. “I would like to take that from terminal to at least manageable like other neurological diseases like MS and Parkinson’s. I prefer cured, but I’ll take manageable.”

PJB starts campaign for own building

Project Just Because announced last month that it has started a fundraising campaign to purchase its own building.

The Hopkinton nonprofit currently leases a facility on South Street. It plans to buy a building on the same street and move in by July of 2022. The goal is to raise $2.5 million.

“We cannot continue scrambling for space and dedicating more and more of our budgets to escalating rents; we need a permanent home,” the organization stated in a press release.

Project Just Because was founded more than 20 years ago, originally operating out of a Hopkinton basement, the release states.

It has grown to become one of the area’s largest pantries — serving 40,000 clients in 2020 — providing food, clothing and other necessities to individuals and families in need.

For those who missed the announcement last month, following the success of last year’s graduation car parade, Hopkinton High School is running it back again for the Class of 2021. This year’s event is Saturday, June 5, starting at 10 a.m., and it follows the same route as last year, passing all the schools in town — including the defunct Center School.

The event is the day after graduation, which will be held in person at the HHS football field, starting at 6 p.m. Graduates are being allowed four guests each at the field, and two for a watch party at the HHS Athletic Center.

Both events will be broadcast on HCAM-TV and livestreamed on HCAM’s Youtube page.