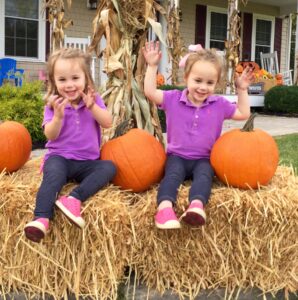 Twins Annie (left) and Charlotte Masters, who passed away during the 2019-20 school year, inspired the playground communication board project.

Annie and Charlotte Masters were twin sisters from Hopkinton who loved playing outdoors during their brief lives. Despite battling a neuromuscular disease and then epilepsy, the girls communicated their joy through their radiant smiles, according to their speech pathologists at Marathon Elementary School, Myah Stone and Lynn Conroy.

Charlotte passed away in November 2019 at the age of 5, and Annie died less than three months later, shortly after turning 6.

As a lasting tribute to their lives, their teachers decided to create a communication board at their school playground to help all children, but particularly those who have difficulty verbalizing their thoughts, to be able to understand one another’s needs. Now the idea has been adopted by the Doug Flutie Jr. Foundation for Autism, with the goal being to have one in every city and town statewide.

“Lynn and I had wanted to create this playground communication board at Marathon,” Stone said. “The afternoon we came back to the preschool after Annie’s wake [in early February 2020), we were very motivated and inspired to start.”

They began the process by interviewing teachers to collect the appropriate vocabulary. They integrated them using a system called the Modified Fitzgerald Key, which color codes words by their part of speech. It provides icons that display an activity or object that children can point to, showing activities they would like to engage in or questions to ask.

Some examples a child can point to are graphics to ask what someone’s name is, explain that he or she wants to play on a slide, or indicate a need to use the bathroom.

“A lot of children have anxiety or social skills problems and need little help getting organized at recess,” she continued. “They can be used to help make play plans.” 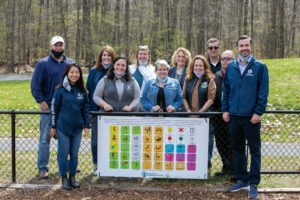 The pair designed the aluminum sign, which took about 8-10 hours to complete, Conroy said. They made signs for the town’s other elementary schools — Elmwood and Hopkins — as well as Marathon.

“Funding from the district was huge,” Conroy said. The support of team leader Mary Lynn Freedman, the special education department staff, director of student services Karen Zaleski and assistant superintendent Jen Parson was critical to the success of their initiative.

“Lynn and Myah really put their hearts into it,” Freedman said. “The communication board creates equity and makes sure that every child will be able to have a welcoming place to play. We were happy to support their effort with grant funding.”

The Flutie Foundation became involved this past fall when Hopkinton resident Ellen Fitzpatrick, the foundation’s programs and operations coordinator, visited the Marathon playground with her daughter.

“She immediately knew what the sign was and knew its power,” Conroy said. “She contacted our principal, who contacted us about creating a sign for the EMC [Park] playground that would be modeled on the preschool sign. Myah and I said we would love to help.”

The sign was dedicated April 28, with the Masters family and representatives from the school and the Flutie Foundation present.

“Essentially I was inspired by the one at the Marathon and the story that Myah and Lynn shared about Charlotte and Annie,” Fitzpatrick said. “I collaborated with them and asked if we could share their template. The rest is history.”

In addition, at the EMC playground there is an 8.5-by-11-inch sign explaining the purpose of the communication board to adults and how best to utilize it. This sign was partially funded by the Hopkinton Police Department and Hillers Pizza.

“It is also useful for English language learners who may not know the language well,” Fitzpatrick said of the communication board. “There are sentence starters to help them break the ice. In my eyes, it helps to level the playing field.”

Fitzpatrick said the foundation’s goal is to see such a sign in each of the 351 communities in Massachusetts by 2023, the 25th anniversary of the Flutie Foundation. Some of the foundation’s members are involved in the creation of the signs.

“It is really mind-blowing that we are going to have 350 more of these communities have these signs,” Conroy said. “It just brings tears to my eyes to know how the love of those little girls is just living on and how they can help kids play together.

“One of our big mottos at Marathon is, ‘It all starts here,’ ” she added. “And it is so special to know that this all started right here.”