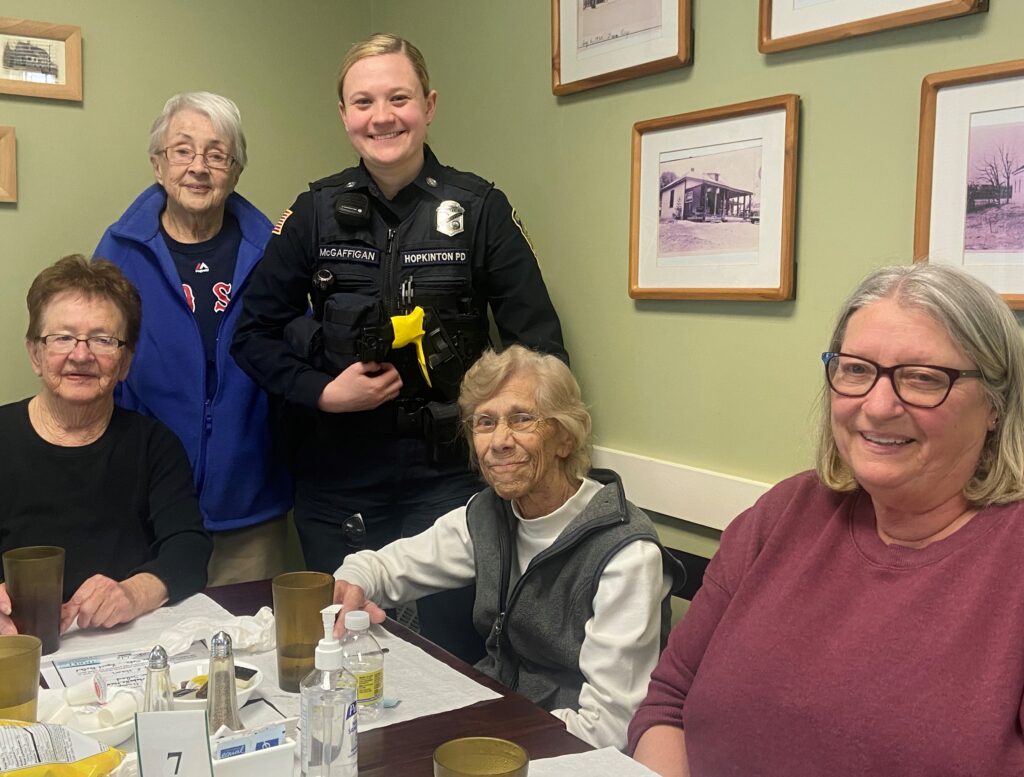 Moira (Molly) McGaffigan is a thriver. A Hopkinton police officer for four years, she is thriving at her job; but more importantly, she is a 14-year ovarian cancer thriver.

The Groton native learned she had the deadly cancer, which usually targets older women, at age 15. “I was diagnosed in August 2008, when I went for a routine physical prior to the beginning of my sophomore soccer season,” said McGaffigan, a triple varsity athlete at Bishop Guertin High School in Nashua, New Hampshire.

“My pediatrician was concerned because my midsection was bloated. An emergency ultrasound showed a large mass in my abdomen,” she recalled. The footlong, 10-pound tumor was so large it blocked the view of her ovaries and could not entirely be seen in a single scan. The tumor, along with an ovary and lymph nodes, were surgically removed at Children’s Hospital. Since she was so young, physicians initially thought the tumor was benign, but 10 days later three pathologists agreed McGaffigan had 1A ovarian cancer.

“My tumor type only occurs in about 20 percent of women with ovarian cancer, and because it happens to grow larger than the more common form of ovarian cancer, my life was probably spared,” McGaffigan said in a speech she gave at the fall 2021 Hopkinton Fashion Show to raise funds for ovarian cancer research. “If my tumor was much smaller, it most likely never would have been suspected, let alone detected, until a later stage, which is when ovarian cancer is detected in most women, and unfortunately, when the disease is less curable.”

According to the Centers for Disease Control and Prevention, ovarian cancer is the second most common gynecologic cancer in the United States. Since most women don’t recognize the symptoms until the disease has progressed, it causes more deaths than other female reproductive cancers. The American Cancer Society estimates 20,000 women will be diagnosed in the U.S. in 2022, with about 13,000 dying of the disease. The symptoms include bloating, pelvic or abdominal pain, difficulty eating or feeling full quickly, and urgency or frequency of urination. 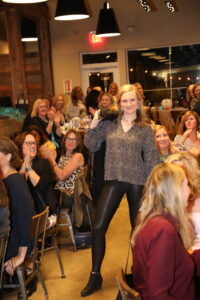 Because her cancer was caught so early, McGaffigan did not have to undergo radiation or chemotherapy. And best of all, her yearly visits with her Dana-Farber Cancer Institute oncologist have been clear. “I am very healthy, and very lucky,” said the 29-year-old.

She realizes other women have not had her experience and has used her platforms as a student-athlete, as a very young thriver and now as a police officer to raise funds for research and spread the word about early detection.

Working with Framingham-based Ovations for the Cure of Ovarian Cancer, which helps fund research of the disease, she started the Teal the Field lacrosse game fundraisers at her schools, Bishop Guertin and Saint Anselm College in Manchester, New Hampshire.

After earning her criminal justice degree, she was hired by the Hopkinton Police Department, which “welcomed the cause with open arms,” said McGaffigan. “Former Police Chief [Edward] Lee said the department would do absolutely whatever it could to help,” including selling butterfly pins and patches in September, Ovarian Cancer Awareness Month, as a fundraiser.

Her Hopkinton police career is an extension of her urge to help others. “It is a great fit for me; the whole town is very supportive of us,” said McGaffigan. As Hopkinton’s elder affairs officer, she said she gets to spend time at “my favorite place in town,” the Senior Center.

Outside of work, McGaffigan enjoys time with her family and as a member of a dragon boat team of cancer survivors who row on the Charles River. She has been honored by the New England Patriots and Boston Celtics for her volunteer work with Ovations for the Cure.

Her underlying passion is to speak out about ovarian cancer. “Education about the disease is so important. Women need to listen to their own bodies. If something is wrong, go to the doctor,” she said. “And if the doctor says it is nothing but you still feel in your gut it is, get a second opinion. Trust your body, trust your gut.”

For more information about ovarian cancer, visit OvationsfortheCure.org or CDC.gov/cancer/ovarian/basic_info/index.htm.