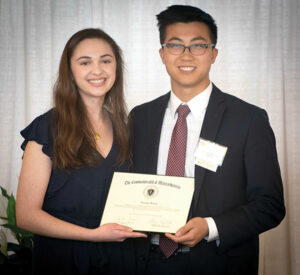 Hopkinton High School senior Young Wang was awarded the Young Philanthropist of the Year Award at the Foundation for MetroWest’s Spring Inspiration Breakfast on April 25 at the Wellesley Country Club.

The award recognizes an exemplary Youth in Philanthropy (YIP) student who is passionate and curious about strengthening their community through philanthropy.

Wang completed the YIP program in Hopkinton this past fall. Allison Roach, his Youth in Philanthropy instructor, described Wang as a “thoughtful leader who pushes himself and others to do their best.”

Wang is extremely involved in his community. In addition to serving as HHS senior class president, he is a Central Massachusetts student delegate for the Department of Elementary and Secondary Education, the Regional Student Council chair, and one of Senator Karen Spilka’s youth advisors. Wang also loves athletics and has been on the varsity football as well as track and field teams for the past three years.

Wang said he was honored to receive the award and hopes to continue making an impact on his community using the skills he learned in Youth in Philanthropy.

Meanwhile, at the Hopkinton Public Schools All-School Art Show, Connor Grady, Gabriel Laberge and Patrick Webb received the Principal’s Award, which is presented to the designers of the three best pieces at the show, as chosen by HHS principal Evan Bishop.

Two Hopkinton brothers, Owen and Evan Fitzpatrick, both won awards in the Library of Congress Letters about Literature essay contest. Evan — who in his essay referenced Elmwood School second-grade teacher Leslie Prior for having a profound impact on him — won top honors for Level 1 (Grades 4-6) to advance to the national contest. Owen won top honors for Level 2 (Grades 7-9) and is the first student in the contest’s history to win twice for his state. His essay was on S.E. Hinton’s 1971 novel “That Was Then, This is Now.” Both students were scheduled to be honored at an event at the State House on May 23.

The winners are Rahul Krishnan, who is headed to the University of Southern California, and Eva Kuruvilla, who will attend Northeastern University.

Recipients were chosen by an impartial panel of college educators who based their decisions on scholastic achievement, community involvement, leadership skills, character and integrity, recommendation letters, as well as an essay submitted by the student.

The Hopkinton School Committee formally approved a proposal by the Hopkinton Upper Charles Trail Committee (UCTC) to construct a portion of a bike path on school grounds. The UCTC is working on a project that would connect the bike paths of Milford and Ashland with a 7-mile trail in Hopkinton. Next steps for the UCTC are to go forward with an engineering study and apply for a Massachusetts TIP grant, which could pay for the actual construction of the trail from Hayden Rowe through the school complex.