I-495 exits in Hopkinton soon to be renamed 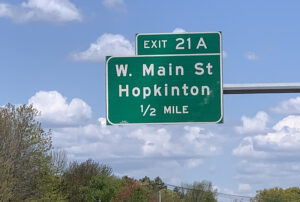 Exit signs including this one soon will be changed. PHOTO/JERRY SPAR

The Hopkinton exits off Interstate 495 are to be renumbered in the next few weeks, the Massachusetts Department of Transportation (MassDOT) announced.

MassDOT stated on May 12 that the exits are in the next group to receive new signage as part of the ongoing program that began last fall. Work is slated to begin May 16 on all I-495 exits between Middleborough and Amesbury and be completed within five weeks, weather permitting.

Due to a Federal Highway Administration requirement, Massachusetts is updating almost all its highway exits to a milepost-based system, moving away from the sequential exit numbering method that had been the norm in the state. This will provide national uniformity, make it easier for drivers to determine distances and allow for more accurate emergency response, according to MassDOT.

The new signs will include panels indicating the old exit numbers. Those are to remain for at least two years.

The entire state sign-update program is estimated to cost $2.8 million, and 90 percent is being paid for through Federal Highway Safety Improvement Program funds, with the state covering the remaining 10 percent, according to MassDOT.