‘I’m driven for this’: After cancer battles, Snyder determined to achieve goal 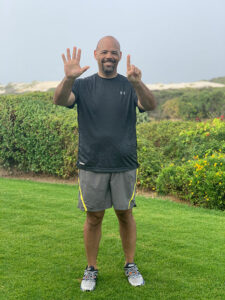 Todd Snyder, shown celebrating the end of a 51-mile training week while in South Africa with his family on a service trip in February, is ready for his first Boston Marathon.

Hopkinton resident Todd Snyder started training for his first Boston Marathon six years ago, after being inspired by his 5-year-old daughter, Ella.

Recalled Snyder: “She was on my shoulders and she bent over and said, ‘I want to run the marathon some day.’ I’m like, ‘Perfect, that would be great. If you put your mind to it you can do it.’ And then she said, ‘Would you run it with me?’ I’m like, ‘Uh … sure,’ not wanting to disappoint her or change what I had said.”

Little did he know what was ahead for him and his family.

Snyder, now 42, had never run except when training to play baseball and football growing up in a Buffalo suburb. He signed up for a beginning running program, started working out and registered for a half-marathon. All was going well. Until March of 2014, when he had a routine physical (his wife made the appointment because he had not seen the doctor in a couple of years). That led to the first diagnosis of cancer.

Fortunately it was a treatable form of cancer, and the prognosis was good. So, after the initial surprise, the family took it in stride.

“We’re pretty positive people,” said Todd’s wife, Dena. “I was shocked, that was absolutely the first reaction. But everyone treats their story or whatever it is differently. And we’re just not negative, down-looking people. We’re pretty centered, so we were pretty positive.”

In fact, Dena said they went so far as to make light of the situation.

“The first time we were kind of humorous,” she said. “We were cracking jokes with people at [Dana-Farber Cancer Institute]. Especially people at Dana but also in our own world were like, ‘How are you guys doing this?’ I’m like, ‘How else do you do anything? One step at a time.’ We were trying to be really centered as we go through things, so we didn’t get caught up in the bigger picture.”

Following a few months of treatment, Todd was in remission and, after feeling the “runner’s high” during his first round of training, he was eager to hit the roads again to prepare for his marathon bid — only to be derailed again.

“January came around again, I was about to restart, and I got re-diagnosed shortly after that,” he said. “And this time it forced me to be inpatient. The previous chemo stint was outpatient. This one I had to actually go in for a week at a time and be inpatient, then be released for two weeks to recover, then go in for another one.”

While this round was substantially more challenging, still there were positives. The support of the Snyders’ neighbors and the overall Hopkinton community was “amazing,” he said. And when he went into remission for the second time in November 2015, he felt that he was stronger mentally, and that would serve to make his marathon training more manageable.

“The mental aspect of going through treatment has helped me there,” he said. “Because I wouldn’t wish chemotherapy on my worst enemy. It’s terrible. I’m not going to beat around the bush there. It’s terrible. Having experienced that, running, as hard as it is, as much of a physical toll as it can take, I feel as though I can take it.”

Another key for Snyder was that he did CrossFit and worked out on his own until he was strong enough to resume running.

“Once I was declared in remission both times I called up and got a personal trainer,” Snyder said, “someone who would understand what I’ve been through, understand that I don’t have the same lung capacity as I used to have. I don’t have the same ability to carry oxygen in my blood like I used to. And work with me just through movements to start, and then get to a point where I can take a class with the general population and feel like I don’t want to pass out afterwards. That has helped greatly in keeping my body limber enough, my muscles in tune enough so that when December rolled around and I started training, I could literally just hit the ground running, which is what happened. My first runs were three miles and I hadn’t really missed a beat, which I was surprised with, to be honest. I wasn’t expecting that. The key was that I wasn’t just [inactive] through those years of not training for running. I was still working out.”

Snyder, who received a charity bib number from the Hopkinton Public Library Foundation (hopkintonpubliclibraryfoundation.org/bostonmarathon/toddsnyder/), also is grateful for the support from his family, his “amazing” wife Dena and daughters Ella (now 10) and Phoebe (7).

“The kids are 100 percent behind him,” Dena said. “They’re cheering him on. They chase him with water and food if he doesn’t eat enough after a run. They’re definitely part of this. So I think him going on has become a model for them, about strength and endurance, and not just saying, ‘Oh, I’ve had a story and stuff has happened to me, let me sit on the couch.’ That’s not a good goal. Let’s go.

“We’re just proud,” Dena continued. “I have always taken the mentality since the moment he got sick that we were going to look at this as a way for our family to grow and a way for our family to be better. I wanted the kids to get perspective and strength from it. Like, when we shaved his head each time [before chemo], the kids would dye their hair crazy colors. So everybody would have like a special event together. And I think marathon training has kind of fallen in that.”

Now, as Snyder closes in on the end of his six-year journey to the start line — a mere three blocks from his house — he is ready to accomplish his goal, and if he serves as an inspiration to fellow cancer fighters, that makes it even better.

“My journey had a good prognosis from the beginning, and not everybody has that,” he acknowledged. “So I don’t want to give the impression [that it’s more than that]. What I will say is with determination and listening to those around you and knowledge, all those are key to getting through a cancer battle. I think that determination has led to me running this marathon — a challenge in meeting that challenge.”

Added Snyder: “I don’t want to [disrespect] people who are out there pushing it and have injuries and are fighting and doing three-hour marathons. I’m not in that echelon. But for me, my feeling is I’ve been through a lot and I feel as though I’m driven for this. My attitude now is, nothing is going to stop me.” 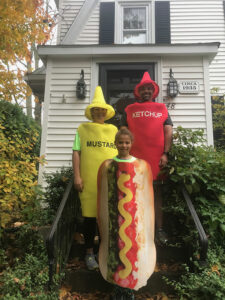 The Snyder family, (from left) Dena, 10-year-old Ella and Todd (7-year-old Phoebe not pictured), dressed up for a Halloween-themed 5K in October. 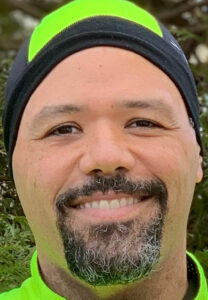