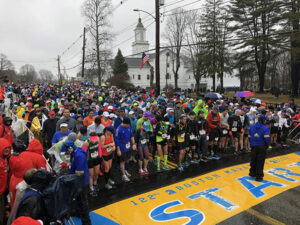 The ability of Boston Marathon race director Dave McGillivray and race volunteers to get the marathon started smoothly each year is a tremendous accomplishment.
PHOTO/HOPKINTON MARATHON COMMITTEE

The Boston Marathon brings great excitement, pride and even some financial gain to Hopkinton every year. Here are some things you might not know about the the world’s most prestigious marathon.

— The course only lasts 1.9 miles in Hopkinton, but of course participants spend much more time here waiting for the race to begin and trying to stay warm and dry. The 32,000-plus runners and wheelchair racers will collectively shed an estimated 50,000 pounds of clothing before they head out on Route 135. The majority of those clothes will end up being hauled away by trucks from Big Brothers Big Sisters of Massachusetts Bay, headed for donation centers. The rest will end up in my closet (adult medium sweatshirts are especially appreciated, thank you).

— The entire marathon course has a net downhill of 459 feet. Hopkinton is responsible for much of that — the first three-quarters of a mile is a drop of 165 feet.

— The marathon first started in Ashland in 1897. In 1924 the course was lengthened to the Olympic standard distance of 26.2 miles and the start moved to Hopkinton — although not to the current spot. The start line shifted among a handful of locations on Route 135 and Hayden Rowe Street before finding a home next to the Town Common in 1986.

— The winner of the first race to start in Hopkinton was Clarence DeMar, who holds the record for the most Boston titles with seven. DeMar might have won even more, but doctors advised him to stop running after detecting a heart murmur, so he took off a few years in his mid-20s. Then he missed a few more years after joining the Army for World War I.

— Meb Keflezighi will serve as grand marshal for this year’s race. Keflezighi memorably won the 2014 race, a year after the bombings at the finish line, becoming the first American winner since 1983.

— During my interview with Dena Snyder for the article on her husband, Todd (front page), Dena credited Todd’s diligence in preparation, noting, “You can’t just wake up April 15th and decide you’re going to run.” Yeah, about that: I might have attempted that once or twice when I was young and foolish. And to her point, it didn’t go so well. There were a few miles of walking involved. But I did make it to the finish line. And then I went to work my 6 p.m.-2 a.m. shift at the newspaper where I was employed at the time. So there’s that.

— One time — this was well before the wave starts — I was the last person to cross the start line (not counting race director Dave McGillivray, who heads to Hopkinton at night to run the course). I was in the back of the pack moving up to the start when someone called my name. It was an old family friend I hadn’t seen in years, so I walked over to the side to talk to him for a couple of minutes. Eventually he said, “You probably should get going.” I turned around and all the other runners were gone. For the record, I did not finish last.

— The Michael Carter Lisnow Respite Center first opened in Hopkinton 23 years ago on the day of the Boston Marathon. Now a large number of runners — including a huge contingent of employees from Dell — run to raise funds for the center. It’s become one of the center’s major fundraisers.

— Good luck to all participants, especially the charity runners for Team Hoyt, who my family has been proud to host the morning of the race for the past 12 years. As the Hoyts say: “Yes you can!”