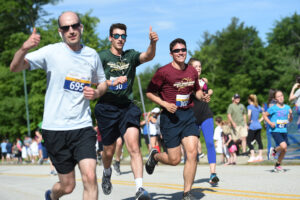 The Sharon Timlin Memorial Event is going strong heading into its 16th year, having already
raised more than $2 million for ALS research.

One key part of the culture of Hopkinton is volunteerism and community efforts toward a worthy cause. Another important piece of Hopkinton is running. The annual Sharon Timlin Memorial Event, this year taking place on June 15 at Hopkinton High School, encapsulates both in a commemorative and fun way, raising money and awareness on a local and national level to find a cure for ALS.

Amyotrophic lateral sclerosis, more commonly known as ALS or Lou Gehrig’s Disease, is a progressive and eventually fatal illness that currently has no known cure or effective treatment. Especially given its particularly cruel nature — victims gradually lose the ability to control their muscles, to communicate and to breathe — the founding and success of the Timlin 5K is monumental in finding a cure for the heartbreaking disease. Although the 16th edition of the event is two months away, preparations started taking place already. In fact, the goals were set long before — almost 17 years ago.

Abbie Rosenberg, founder and director of the event, said that the event’s roots began with inspiration. A close friend of hers, George Mazareas, was diagnosed with ALS when she moved to Hopkinton in 2003. Mazareas is still living with the disease today.

“When I asked what I could do to help, all he said was to raise awareness and money for a cure,” Rosenberg recalled. “Because I had just moved to town that year and was surrounded by the culture of running, I decided to start a race in town to raise money for ALS.”

Mike Timlin also had just moved to the area that year, signing as a relief pitcher with the Red Sox. Over his successful career, the now-retired Timlin pitched more than 1,000 games across 18 Major League Baseball seasons and won four World Series championships (two with the Red Sox). However, he has yet to strike out his biggest opponent — ALS. Timlin’s mother, Sharon, lost her life to the disease in 2002. Inspired by her dedication, heart and courage, Mike and his three sisters began to search for avenues to help ALS victims.

Rosenberg and Timlin were brought together by the Angel Fund, a local nonprofit charity with a sole mission of funding ALS research. Rosenberg, as a part of the fund’s advisory board, and Timlin and his wife, Dawn, as honorary directors, have worked together since 2003 in making the Timlin Race as successful as it is.

“We ran into some people with the Angel Fund 17 years ago,” Timlin said. “We consider those people family. It’s just amazing that God put us together and that we are able to further research by just raising money and doing something that a lot of people love to do.”

Timlin’s introduction into the world of ALS research began when he first met with Dr. Robert H. Brown at Fenway Park. Brown, director of the Cecil B. Day Laboratory for Neuromuscular Research at UMass Medical School in Worcester, has devoted his life to finding a cure for the disease. When Timlin took a tour of the lab facility and spoke with the scientists doing daily research, he explained that “being able to talk to Dr. Brown and just see his passion is incredible. He took on the project knowing that it is such an incredibly high hurdle to get over, but we have supported him and his team wholeheartedly for the past 16 years.”

To date, the Timlin Race has raised more than $2 million for the lab, where worldwide groundbreaking advancements are being made daily.

Some of these strides and breakthroughs that Brown and his team have made in the field of ALS include but are not limited to the discovery of over 100 ALS genes, the development of several new mouse models, successful identification of new ALS biomarkers, and new insights into possible causes of sporadic (non-familial) ALS. The team at UMass Medical also has developed various therapies for ALS and have sparked an increase in highly successful drug companies engaged in drug discovery for ALS.

“All we want to do is to find a cure. There’s nothing more than that. It’s the most simple statement that I can give,” Timlin said when asked about his longterm goal for the organization. “We’ve decided to focus on the research side and do as much as we possibly can. Dr. Brown has assured me many, many times that they are doing everything possible to find a cure, and I put my full trust in him and his team.”

Timlin also received the distinguished Lou Gehrig Memorial Award in 2007 for his character, integrity and heart on and off the field.

“It was an amazing honor to be recognized — not only for what we do on and off the field, but for knowing that it was the Lou Gehrig award and that he suffered from ALS. That meant a lot to me. More importantly, it just fueled the fire to continue doing it. You receive recognition for doing it, to begin with, which is great, but it doesn’t really matter because the job’s not finished. Even though I don’t play baseball anymore, I still have goals and I want to do as much as we can. Hopefully, we’re working towards the goal of ending ALS.”